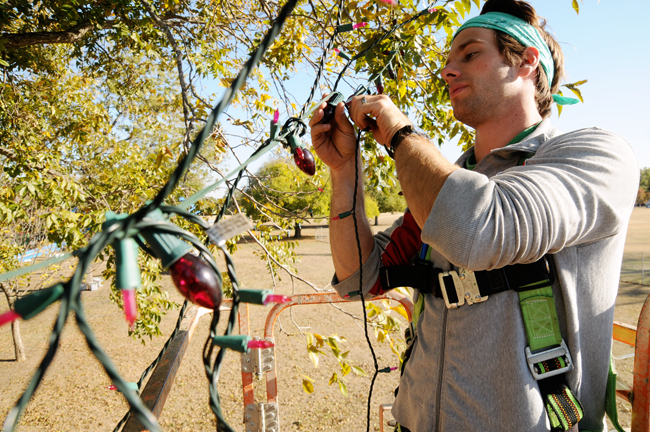 Lighting technician Clay Eads arranges part the Trail of Lights display in 2008, the last year the event was fully operational. Lack of funding inhibited the event in 2009 before it was phased out completely in 2010 and 2011. " />

Lighting technician Clay Eads arranges part the Trail of Lights display in 2008, the last year the event was fully operational. Lack of funding inhibited the event in 2009 before it was phased out completely in 2010 and 2011.

After last year’s glowing success, the Trail of Lights will be turned back on for this year’s holiday season and for several years beyond.

The trail was cancelled in 2010 and 2011 because of city budget cuts. In 2012 the RunTex Carrozza Foundation took up the mantle of bringing the trail back, raising funds through sponsoring and once again hosting the Trail of Lights 5K. The event brought twice as many visitors as expected, said James Russell, executive director of the RunTex Foundation.

A resolution passed unanimously by Austin City Council on Thursday directed the City Manager’s office to execute a five-year contract with the foundation to run the trail. For this year and future trails, Russell said the foundation hopes to raise funds to extend the event from eight nights to up to 15, as well as keeping admission free to the public.

“Historically it’s been a free event,” Russell said. “Our intention is to keep it free. We don’t have any immediate plan — nor do we really want — to right away start charging. That gets into a whole different deal and the whole idea of the Trail of Lights is that it’s an inclusive thing, not an exclusive thing. Once you start charging, I think you start walking down a path that’s hard to come back from.”

The Trail of Lights, an event historically held every December since 1967 in Zilker Park, includes intricate displays of lights along the park’s running trail leading up to the Zilker Holiday Tree. The tree is one of Austin’s moon towers draped with 39 strands of lights to form a 155-foot holiday tree, under which visitors often spin or purchase refreshments such as kettle corn.

Advertising senior Kate Griffiths said because of the trail’s previous cancellation, she hadn’t heard of the event before last year, like many other current students, but hopes to go in the future.

“I only moved here four years ago so this is the first year that it’s happened that I’ve been in the area, so I didn’t know about it before this year,” Griffiths said. “I’m definitely going to try to go if it’s going to continue because it looks fantastic.”

Russell said the RunTex Foundation wanted to negotiate the five-year contract to use that time to create an independent, self-sustaining Trail of Lights Foundation to ensure the event will not be canceled in the foreseeable future.

“We would establish its own board, it’s own everything, it’s own 501(c)(3),” Russell said. “We’re wanting the city to be a partner in that as well, to go toward the longevity of the event and to make sure that it’s there forever. I think having it independent like that is the first step in reaching that goal.”

Russell said the foundation plans to create an online system requiring those parking at Zilker Park to reserve and purchase their parking pass online.

Council Member Chris Riley, who co-sponsored the city resolution to negotiate the contract, said the traffic problems resulting from last year’s success are a point of focus for improvement on the 2013 trail and beyond.

“The Trail of Lights this past year was successful beyond all expectations and that did entail some unexpected traffic problems,” Riley said at the Thursday council meeting.