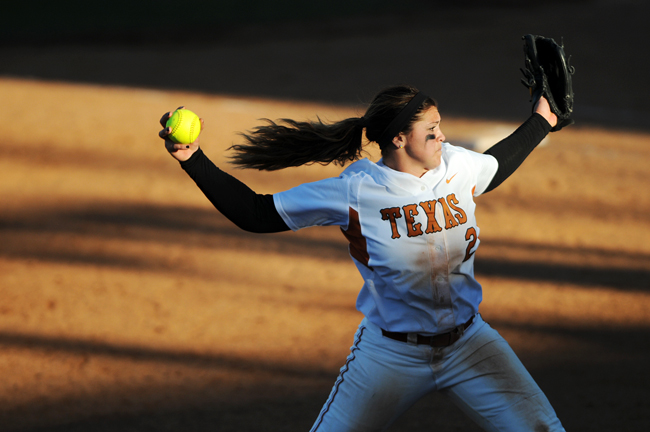 Texas will travel to Lawrence for a three-game series Thursday, Friday and Saturday with the Kansas Jayhawks (21-7) at Arrocha Ballpark.

The No. 8 Longhorns (29-4, 2-0) are coming off a two-game sweep of No. 18 Baylor in their first two conference games, while Kansas has yet to play a game in conference.

It will be a pitching-versus-offense matchup against a team that head coach Connie Clark said to watch out for at the beginning of the year.

Blaire Luna enters the week leading all Division I players in strikeouts per seven innings (13.0) and second in fewest hits allowed per seven innings (2.62). This, accompanied by her two complete game victories against Baylor, earned her the Big 12 Pitcher of Week.

However, she will have her hands full with a surprisingly potent Kansas offense. Kansas’s best hitter, Maggie Hull, is third in Division I with a .495 batting average, while Alex Hugo also posts a high average of .457. Two other plays post an average in the .400s, culminating in a .384 team batting average, the highest in the country.

But Kansas does lack the long ball threat, with only Hugo boasting much power. This will be the first time that the Kansas Jayhawks have squared up against a ranked opponent.

As for the Longhorns, they will face the 50th ranked Kansas pitching staff led by Alicia Pille (7-3).  Longhorn Kim Bruins, like Luna, is coming off from being a Big 12 Player of the Week. Bruins will be complemented by the hot-hitting Taylor Hoagland (.465 average in March) and Taylor Thom (tied for Big 12 lead in RBIs).

The games on Thursday and Friday will be at 5 p.m. and the Saturday game will be at 11 a.m as the Longhorns aim for their fourth-straight 5-0 conference record to open the season.