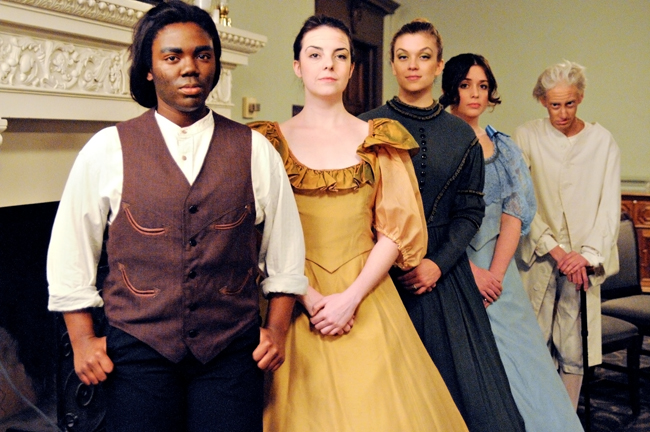 “The Priceless Slave” navigates treacherous waters by exploring the raw nerves of slavery through the complexities of master and slave, husband and wife, man and woman. Part of the Cohen New Works Festival, this story follows three society women and a slave architect as they confront their social boundaries in antebellum Louisiana.

With such a complex issue as slavery, audience members can immediately expect to be uncomfortable. And “The Priceless Slave” is absolutely filled with uncomfortable moments along the lines of jokes made about the Three-Fifths Compromise. Yet the audience is kept thinking rather than bolting for the door.

Not only is the audience trying to make sense of living in the systems of racism and sexism, but so are the characters. The actors develop along with their characters naturally, as if they themselves are trying to piece this life together, rather than simply delivering their lines.

“In general, I don’t feel like I’m playing a character,” Bandoh said. “It wasn’t until last night, I started crying in the cellar scene, that I was like ‘Wow, I’m acting right now.’ So it isn’t that hard for me.”

In a cast where four of five actors are female and a woman plays the main male role, playwright J.M. Meyer could have made major missteps by writing stereotyped female characters. Instead, he carefully crafts refreshing female leads at three very different points in womanhood.

“I don’t think any of us are stereotypes, which might be really easy for a male writer to say ‘Oh this is going to be this sort of woman,'” English and Plan I Honors senior Kelsi Tyler, who plays Alexis Clerel, said. “I think all of his characters, regardless of gender, are very nuanced, very detailed and complicated.”

Indeed, the arcs of the women are heart-wrenching and realistic.

“As actors, we are vessels of a story,” said Katie Folger, theatre and dance and journalism senior, who plays Paulina Gilmer. “We are women, we get this text, and we naturally interpret it as a woman.”

“The Priceless Slave” is rife with tension, but there is a balance of relief through comedy. The character of Thomas Jefferson solely exists for crude humor. Imagine our third president casually touching a lady’s chest and trying to lift hoop skirts with his cane, all while mumbling like the dirty old man he is.

While Thomas Jefferson succeeds at adding serious absurdity to the play, it is Alexis who delivers most of the play’s punch lines.

“If I know that my character’s making a joke, I make that joke and if the audience laughs, great,” said Tyler. “If they don’t, then that’s also fine. But it can be a little jarring when you’re like ‘Oh this is really funny, surely they’re going to laugh’ and you just get an uncomfortable chuckle.”

The intimacy of the Sinclair Suite located in the Texas Union forces the audience to confront the tension and darkness of the play, rather than watch from a comfortable distance back. All corners of the space are explored; from George wandering through the audience to a drug-induced chat that Alexis, Paulina and Sally have from three different sides of the room.

The play remains a work in progress. Actors stumble on lines, furniture gets shifted and props get in the way. The density of the language can alienate the audience as they try to follow along, leaving some scenes as muddled as the issue of escaping slavery itself.

The entire work is the product of a passionate cast and crew, striving to show the complexities of life in a society where one can’t simply run away.

“My goal always in every show I do is that I want my audience to come out thinking,” said Megan Rabuse, theatre and dance and Plan II senior, who plays Sally Spyker. “I hope that they think, I hope that they laugh; I hope that they experience empathy, for all the characters.”