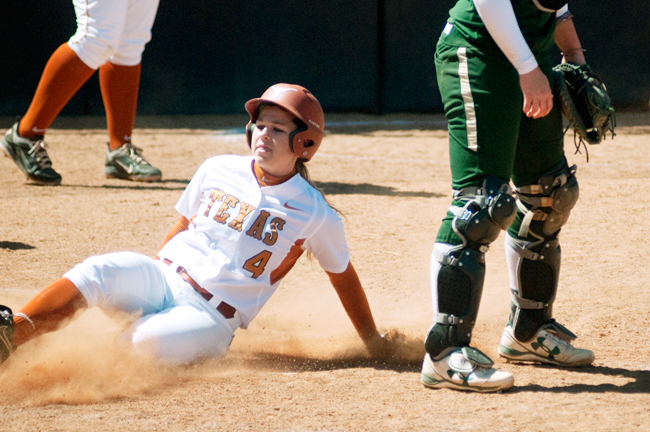 Senior Torie Schmidt slides into base during last Sunday’s game against Baylor. Schmidt scored three runs and had four stolen bases as Texas beat the Jayhawks in the first of three games.

In a game of records for No. 8 Texas, starting off the season 3-0 wasn’t one of them. The squad has opened with a trio of victories for four straight seasons now — but only tonight’s featured a program-high nine stolen bases. The speed helped Texas (30-4, 3-0 Big 12) shut out the Jayhawks 5-0 in the first of a three-game weekend series.

Big 12 Pitcher of the Week Blaire Luna threw the first six innings, allowing just two singles and two walks to join her nine strikeouts. Kim Bruins closed out, delivering the loss to Alicia Pille (7-4), who gave up five runs on seven hits. The Bruins also connected on a fifth-inning hit against Pille, as the Big 12 Player of the Week brought her average to .474 in the last four contests after a zero-for-nine skid.

When a groundout left Alex Jones in scoring position in the third and a fourth-inning sacrifice bunt advanced Chanin Naudin to second, Luna didn’t bat an eye. She swiftly struck out batters in both instances to preclude a scoring threat. After each save, the Longhorns retaliated with runs. Stephanie Ceo sacrifice bunted to bring home Schmidt in the third, her sixth straight hit at-bat. A groundout in the sixth lowered her four-game average to .857 with four RBIs.

“My focus is to see the ball all the way to my bat and just put it in play,” Ceo said. “That’s my game — put the ball in play and make the defense handle it.”

The Longhorns resume play in Lawrence with a doubleheader Friday beginning at 1 p.m. Its Saturday match was moved up because of a forecast of inclement weather.