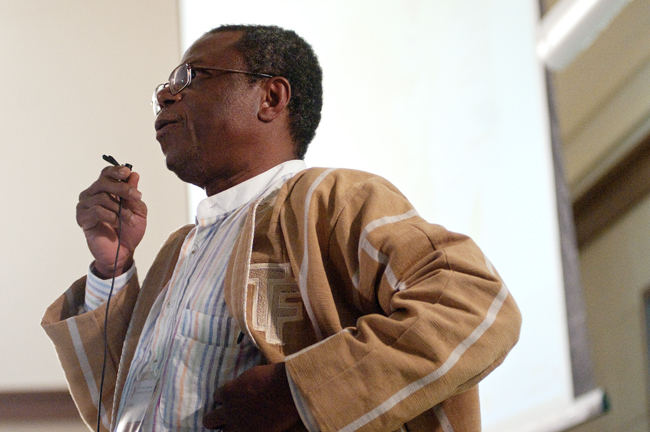 More than 100 academic scholars from around the world gathered on the 40 Acres over the weekend to present interdisciplinary discourses about the African continent.

The 2013 Africa Conference began Friday with a theme dedicated to political expression, religion and social movements in Africa. The conference included more than 30 panel sessions with themes such as “Uses of Media in African Social Movements,” “Violence and Victimization in Africa” and a keynote lecture presented by government professor Catherine Boone, “Social Movements Around Land Claims and Land Rights in Africa.”

“The conference exposes students and the faculty to a large number of scholars drawn from Europe, the U.S. and Africa and by doing so, they brought in their knowledge base outside the classroom,” Falola said. “ Also, it evaluates polices in relation to political issues, democracy, development and global relations.”

Each year the conference presents a new topic for scholars and attendees to discuss. Since the beginning of the conference in 2000, Falola said the conference has become the largest conference on Africa outside of academic associations such as the African Studies Association.

“We have seen diversity in the subject matter we covered such as a focus on the environment, ethnicity and medicine,” Falola said. “Also a change in diversity of representation in terms of not just gender, but
also regions.”

Originally from Cameroon, Alain Lawo-Sukam now teaches at Texas A&M University. Lawo-Sukam presented his paper, “Soccer and Political (Ex)pression in Africa,” in which he said he is exploring the way in which soccer has been used to gain political power. Lawo-Sukam said this conference helps start valuable conversations about Africa.

“The focus on blackness is important to share and change ideas, point of view and to have a feedback on [everyone’s] papers,” Lawo-Sukam said.

History junior Mary Thomas said attending the conference raised her awareness of issues she never thought much about.

“Living in today’s global society means that even though we live half a world away from Africa, their struggles still are important for us to know about and help if we can,” Thomas said.

Conference organizers are already planning for next year’s scholarly forum. The 2014 Africa Conference will deal with the topic “African Diasporas: Old and New.” Next year’s conference focuses on Africa and Africans throughout the world from both historical and contemporary approaches.

Even with plans for next year’s conference in place, Falola said he hopes people who attended the 2013 conference learned something new about Africa in relation to political mobilization, the changing face of Africa and new forms of religious identities.

“We hope to build a global flow of peace which those who meet become connected through social media and they are able to continue that type of dialogue,” Falola said.