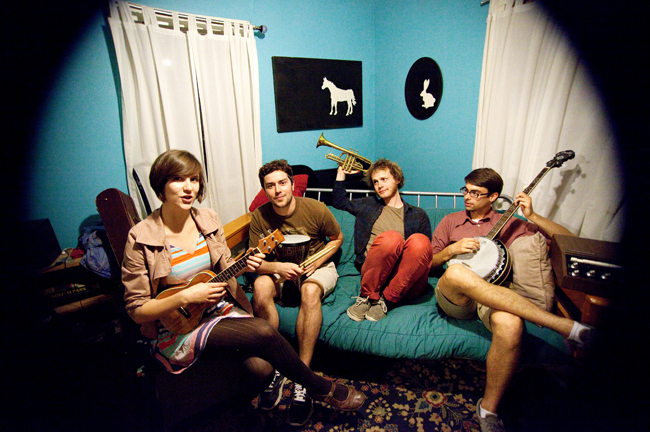 Back on the campus he called home for several years as an American studies student, Miles Kelley’s frizzy hair, tastefully careless slouch and crossed arms give every indication of someone who has put aside his UT degree to pursue a career in music. Plan II and studio art junior Blair Robbins, her Dr. Martens laced tightly around her ankles, joins him outside the Flawn Academic Center.

Together, the current and former UT students make up half of Milezo, a mixed-genre band from the intricate web of Austin musicians.

What began as a name to ascribe his Myspace uploads to, Milezo has turned into a full time project for Kelley.

“Milezo has been my alias for music since I was like 16 or so, and that’s why the name’s so silly,” Kelley said. “I never thought it would actually be a thing so I guess I’ll just go with it.”

The group’s current member lineup has been solid for almost a year now, and it released its first album last October under the name Milezo & the Noise.

Kelley’s vocals are somewhat reminiscent of what Daniel Johnston might sound like if he were happier and had grown up listening to Beach House or Real Estate. The album plays it safe, but for someone who admits he can’t read music, the songs are all well written and well executed.

“I did orchestra in middle school but I got a referral for, like, surfing on my [instrument] case and it left a big mark on the ground, I was just like a class clown,” Kelley said. “I took classical guitar for a year at McCallum High, but it was more an excuse to play music and hang out with my friends.”

Some remnants of Kelley’s class clown-worthy humor still remain, but he seems to be more serious about his music than he was in the midst of his middle school orchestra days.

Robbins, who plays keys for the group, took a more refined approach to music than Kelley. She took piano lessons throughout her childhood and has been teaching herself guitar on and off for the past few years.

Unlike Kelley, who has been recording music since the days of Old Myspace, recording is a relatively new concept to Robbins.

“I never really started fully appreciating recording until I met Miles, but now I’m realizing how awesome it is to have a record of yourself and finish something and be proud of it,” Robbins said.

According to Kelley, the group is in the process of recording two more albums right now, one at a home studio, and another at Raw Paw Studios, where they recorded their first album. He said the goal for this year is to release two to three more albums and continue to grow the band’s presence and following in Austin.

“It was kind of off the radar until like about a year ago,” Kelley said. “But we have some really cool fans now who seem to be really into it.”

As for the next five years, Kelley has some pretty lofty goals.

“In like five years, we’ll be playing ACL and I’ll be the speaker at South By Southwest and I’ll give a speech about how you can do it, too,” Kelley said, “and I’ll be hanging out with Daniel from Spoon all the time.”

In the meantime, Milezo can be seen playing at house shows and local venues in Austin.