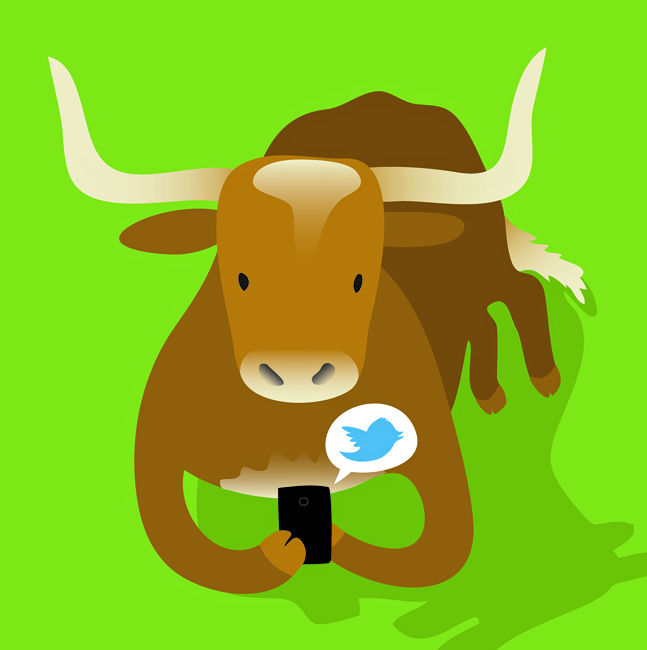 UT is more popular than Beyonce. At least maybe on Twitter.

Among Texas’ universities and colleges, UT-Austin has the highest Klout score. Klout is a company that analyzes a person’s or company’s social media influence and engagement by providing a ranking between one and 100.  UT-Austin’s Klout score may be higher than that of any Texas institution, Texas business or Texas celebrity — at least I can’t find anyone higher. Even Beyonce's klout score is two points below UT.

It’s easy to contend that Klout may not be the best way to rank social media popularity and influence — Beyonce has 7 million more followers than UT-Austin, and her Klout score is based solely on her Twitter account while UT-Austin’s is based on several of its social media accounts.

But it’s hard to argue the UT-Austin Twittersphere and social media landscape isn’t a buzzing, fun and interactive place to be. After all, the University has won awards for its social media work.

With that said, here are 10 UT-related Twitter accounts every UT student should be following:

1. @UTAustin:
@UTAustin is the mother ship. It is the main, official account of the University. With more than 46,000 followers, this Twitter account has a lot of reach.

“The purpose of this account is to share the news of the University as a whole,” Carls said. “Everything from research to athletics, and just shed light on all the great things going on.”

Carls also engages with people talking about UT, and he helps answer questions.

3. @JonCozart:
In March, radio-television-film sophomore Jon Cozart’s “After Ever After” video quickly went viral. Cozart was already famous on YouTube for several of his other videos, including “Harry Potter in 99 Seconds.” But in just two weeks his newest video parodying Disney princesses got half the number of hits his most popular video took more than a year to get. Cozart promotes his videos, and also provides the occasional funny quip.

4. @UTAustinPolice:
A majority of the University of Texas Police Department’s Twitter messages have to do with Campus Watch, the daily crime report sprinkled with sarcastic jokes. But this Twitter account also sends out breaking news updates when something big happens.

5. @thedailytexan:
I would be amiss (fired?) if I didn’t recommend The Daily Texan’s Twitter account. The Texan’s Twitter was active during both the bomb threat and presidential debates last fall. Following the Texan’s Twitter is a way to follow breaking news and to keep up with what the Texan is writing if you do not visit the website every day.

6. @HoracioUgeo:
In an effort to improve transparency, Student Government President Thor Lund and Vice President Wills Brown have kept an active Twitter presence by sending Twitter messages about every meeting they had and every accomplishment they met. It remains to be seen if Student Government President-elect Horacio Villarreal and Vice President-elect Ugeo Williams will duplicate this feat.

Regardless of whether they can match Lund and Brown, Villarreal and Williams are the student body’s new representatives. Students should follow them — they will be involved in a variety of things impacting the campus.

7. @BobMetcalfe:
Bob Metcalfe is a UT-Austin professor who co-invented the Ethernet cable and has an encyclopedic knowledge of startups and entrepreneurship opportunities. Anyone who enjoys tech news would enjoy reading Metcalfe’s updates on tech and startup news.

8. @utstudentaffair:
UT’s Division of Student Affairs oversees many student resources on campus, including the Division of Housing and Food Service, University Health Services and the Student Events Center. Assistant Director of Student Affairs Joshua Cook, who runs the Twitter account, said he makes sure students are aware of all the services UT has to offer students. He also engages with students.

9. @GagePaine:
It’s hard to find administrators on Twitter, but Gage Paine, the vice president for student affairs, is an exception. Student affairs is focused on engaging students and getting them involved with programs at UT. Paine said while learning the best ways to use social media takes time, Twitter has worked for her.

“I get a picture of things students care about … and I follow all sorts of offices and other folks on campus,” Paine said. “So it helps me pay attention to what is going on on campus.”

10. @electrolemon:
In the interest of full disclosure, Demi Adejuyigbe does work for The Daily Texan. But that doesn’t mean we shouldn’t recommend him. With more than 6,000 followers, Adejuyigbe is rising to celebrity status on campus. A photo of Adejuyigbe has even been seen on Tosh.O. His tweets will add some comic relief to your Twitter feed and a few chuckles to your day.