Up-tempo offense a nice wrinkle, but Longhorns still have some kinks to work out 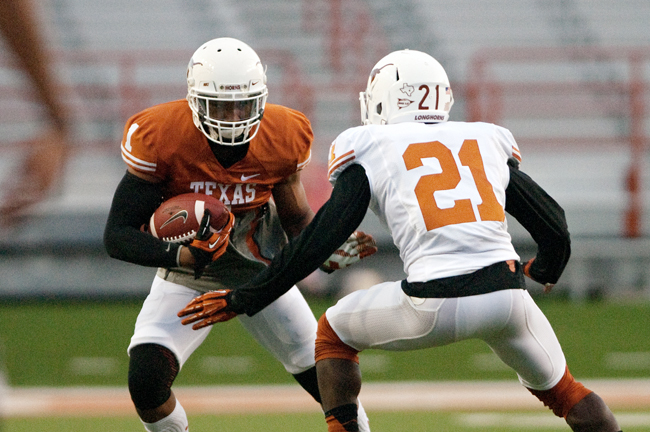 Mike Davis runs with the ball in Texas’ spring game. Davis four passes for 66 yards and a touchdown.

Like many things Texas has done this offseason to get with the times, the Longhorns have installed a new, up-tempo offense.

It’s not anything like Oregon’s quick-strike, high-flying attack or Oklahoma’s prolific no-huddle offense. But it’s a step in the right direction. With David Ash coming out of spring practice as the undisputed starting quarterback for the first time in his career and a pair of starting wideouts from last season returning, including all three tailbacks, Texas might be able to pull it off.

But if the Longhorns’ spring game Saturday was any indication, there are plenty of kinks to work out.

It doesn’t matter how early in the play clock you snap the ball – and co-offensive coordinator Major Applewhite said that he’s aiming to snap it by the 15-second mark –you can’t turn the ball over. And Ash did that twice Saturday. Jordan Hicks picked off a second-quarter shovel pass and Adrian Colbert intercepted an overthrown pass over the middle on Ash’s next drive.

“I did a couple things that were pretty uncharacteristic that I wish I hadn’t done,” Ash said. “I needed to just eat it and be aware of the situation, run the ball and get one yard. We can’t score like that.”

Except for those two interceptions, which head coach Mack Brown said were more than Ash threw all spring, Ash was sharp and made good decisions. He completed 17 of 24 passes for 162 yards and two touchdowns – a 38-yarder to Mike Davis and a 24-yarder to Kendall Sanders. Like Davis, who took advantage of a busted coverage on his score, and Sanders, who slipped past a couple of defenders before scampering into the end zone on his, this up-tempo offense should help Ash and his development.

“It’ll be faster,” Brown promised. “Those guys are constantly sprinting. They never stop. It’s a good message to them that they’re going to have to be in great shape, better than they’ve ever been to do this. We’ve got to be snapping the ball every 15 seconds.”

Having a faster-tempo offense can also serve to benefit the Texas defense as well. The Sooners torched the Longhorns, outscoring them 118-38 over the last two years, with their up-tempo offense. But now having faced an up-tempo offense every day in practice this offseason, Texas should be better prepared for offenses like Oklahoma’s this upcoming season.

“It’s pretty hard [to defend] but I feel like this spring, as a defense, we did a good job changing to the tempo,” defensive back Adrian Phillips said. “We worked on it. That was an emphasis of ours all spring. It’s different but you get used to it after a while.”

Brown has adjusted his recruiting philosophy to recruit sophomores — he already has three Class of 2015 commits — and more aggressively recruit juniors. He hired a director of player of personnel from Alabama, who has been two steps ahead of everyone in college football ever since Nick Saban took over in Tuscaloosa.

Now, the Longhorns are employing a new-look, fast-tempo offense, one that some of the highest-scoring teams are using. It just needs a little fine-tuning.