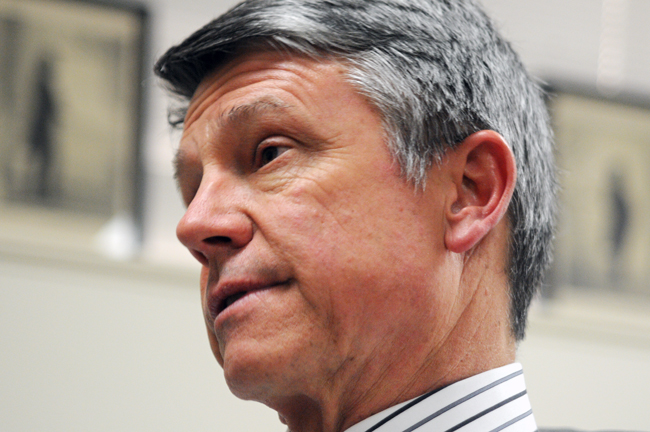 While university presidents and the chancellor may be the public faces in front of the Texas Legislature, one UT System official plays a more behind-the-scenes role in the lawmaking process.

Since 2006, Barry McBee, UT System vice chancellor for governmental relations, has acted as the liaison between the System and the state and federal governments, both of which he has considerable experience in. Over the years, McBee has hopped from executive office to executive office, working for Govs. William Clements, George W. Bush and Rick Perry, as well as Texas Attorney General Greg Abbott.

“It’s a little bit of walking in a man’s moccasins,” McBee said. “I’ve walked in a lot of moccasins in town so that’s kind of helpful when I go see people. I’m representing UT but I also know where you are in this issue and maybe that helps us all get to a win-win.”

McBee said his experience as a “creature of the executive branch” helps him discuss issues that could impact the System with staff in those offices and members of the Legislature.

McBee said he and his office work to provide objective information to the state government on how the System and its institutions will be impacted by certain reforms, such as outcomes-based state funding. He said they also work with the state to facilitate System projects that require state action, such as establishing a new institution in the Rio Grande Valley.

“Our job is to provide lawmakers with an institutional perspective on how we will [be] impacted by the law,” McBee said.

To do so, McBee meets with legislators, attends committee meetings and sometimes testifies before those committees.

McBee brings years of governmental experience to his current job. The University of Oklahoma graduate became involved in state politics at a crucial turning point in Texas’ partisan makeup. In 1986, McBee sought work from James R. Huffines, then secretary of appointments to the recently elected Clements, the first Republican governor of Texas since Reconstruction.

In 1990, Perry tapped McBee to be his deputy commissioner after winning the post of Texas agriculture commissioner. McBee also served stints as Perry’s chief of staff during his terms as lieutenant governor and governor.

“There weren’t many Republicans around town,” McBee said. “So when Rick Perry won and Kay Bailey Hutchison [who became state treasurer, an office abolished in 1996] won statewide office, the first place they looked to start putting their teams together were people who worked for Bill Clements because we were the only young Republicans in town.”

For example, McBee sought legal advice in 2001 regarding appointing a former Enron executive to the Public Utilities Commission after the company’s crash. He was also frequently called for legal advice when Democratic legislators left the state to prevent the Legislature from voting on a controversial redistricting bill in 2003.

These experiences may have prepared McBee for his current position, which he took about seven years ago after Huffines, then chairman of the UT System Board of Regents, suggested he take it.

The System is currently embroiled in a controversy surrounding President William Powers Jr. and the regents, which state Rep. Jim Pitts, R-Waxahachie, recently called a “witch hunt” intended to oust Powers. As a result, lawmakers have begun examining the role of regents within university systems.

McBee said the controversy does not impede his job and that he focuses on providing accurate and unbiased information to legislators about how proposals to reform how boards of regents govern system institutions would impact the System.

“If you don’t walk in with credibility that I’m going to give you accurate information, that’s the kiss of death,” McBee said. “I lose all credibility otherwise.”