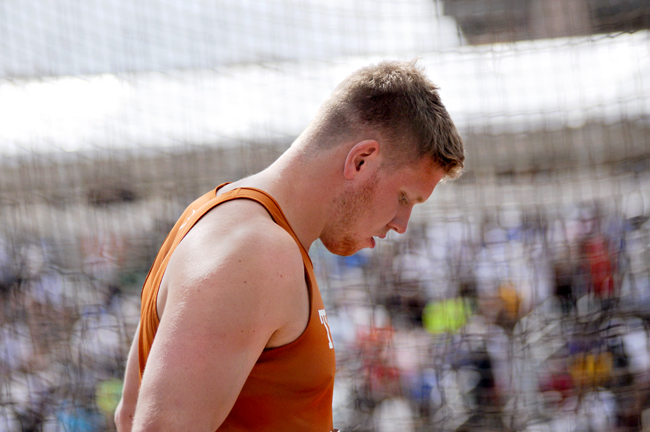 Sophomore Ryan Crouser threw a personal best in the shot put during the Texas Relays this past weekend. Crouser has fought back from a string of setbacks, including a torn ligament in his hand and a throat infection, to return to his impressive freshman form

The Texas Relays hold a special place in the hearts of young athletes who get to mix and mingle with some of the best track and field stars in the world. Most see the meet as their first real experience in the track and field world. For sophomore Ryan Crouser, his second appearance at the Texas Relays also marked a milestone, but for a completely different reason.

“It was big,” Crouser said. “I’ve had this day marked on my calendar for a long time.”

A series of injuries have plagued Crouser since tearing a ligament in his hand halfway through the NCAA Indoor Championships, a big stage for the then-freshman athlete. He persevered through the injury, making nationals in the shot put the following outdoor season, still severely hampered by his hand injury.

A throat infection at the end of summer then robbed him of his fall conditioning and forced him to redshirt his sophomore indoor season. His tonsils had to be removed, and a strep infection was then found where his tonsils had once been.

The hardest thing for Crouser was not dealing with the pain, but seeing his Texas teammates travel to and from track and field meets around the nation.

“It’s tough. They’re flying out on Thursday and coming back Sunday, telling stories about the meet,” Crouser said.

In their absence, he worked hard on his own at Mike A. Myers Stadium and Soccer Field, trying to get back into the form that won him All-American and All-Big 12 accolades, a handful of state titles and set three national high school records.

“I was just sitting at home, working on homework,” Crouser said. “I would entertain myself by going out and throwing by myself. I’d take six throws out here by myself and see how I measured up with the team.”

Crouser’s strong work ethic comes from a deep pedigree of track and field athletes running throughout his family. Mitch Crouser, his father, was fourth in the Olympic Trials, and had to settle for discus alternate as he missed the 1984 Olympics by one spot. His uncle, Dean, was a NCAA Champion in the discus and shot put. The University of Oregon track team also has a strong Crouser backing, with his cousins, Sam and Haley Crouser, currently on the Ducks’ roster.

As for how the Gresham, Ore. native wound up plying his trade for the Longhorns, UT’s esteemed mechanical engineering program, along with Austin’s weather has to take the credit for that.

“The University of Oregon doesn’t have engineering at all, so that’s a big reason.” Crouser said. “Also, the rainy weather gets to you after a while. I’m really enjoying it down here. I know all the guys back home are jealous of it.”

All the hard work Crouser has put in paid off at the Texas Relays. In his first shot put competition since the long indoor layoff, Crouser threw the shot put a personal-best length of 67 1/2 feet (20.43m) to win the event and place him third on Texas’ all-time performance list. The toss made a statement — Crouser is back and ready to claim the national title that has eluded him since suffering multiple setbacks.