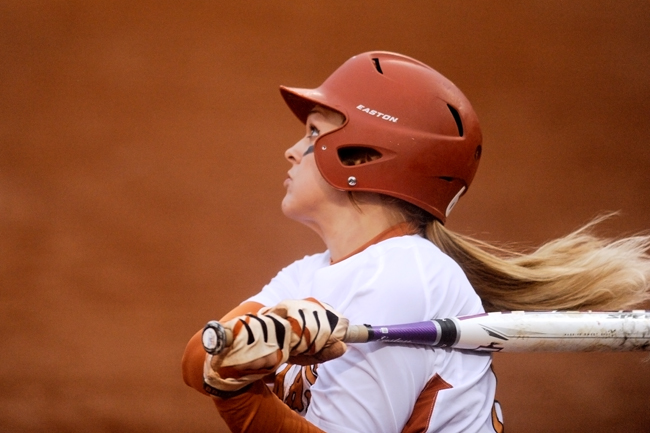 Senior Taylor Hoagland bats against Houston Baptist during the Longhorns 5-0 victory in February. Hoagland has 50 walks on the season, six shy of the Big 12 conference season record. Last weekend against Kansas she was walked 13 times in 14 appearances, hitting a grand slam in the other. " />

Senior Taylor Hoagland bats against Houston Baptist during the Longhorns 5-0 victory in February. Hoagland has 50 walks on the season, six shy of the Big 12 conference season record. Last weekend against Kansas she was walked 13 times in 14 appearances, hitting a grand slam in the other.

Eight straight times to begin the series it was the same. Taylor Hoagland would walk up to the plate, watch a few pitches go by and then take her free base to first.

The eight consecutive intentional walks to start the series was tied for the second most in NCAA history, only to Southern Miss’ Megan Hill’s 10.

But Kansas should have walked her at least one more time.

On her ninth trip to the plate, Kansas had nowhere to put the big-hitting righty. The bases were full. Tied game. Hoagland approached the plate knowing that for the first time in the series she would get a pitch to hit.

And she took advantage of it, driving a fastball straight out of the park for a tie-breaking grand slam.

“I was thinking they had to pitch to me,” Hoagland said. “So I was waiting for that pitch, that one strike, and I got it.”

So Kansas did the only possible thing left. Walk her until they left town.

“I knew they didn’t want to pitch to me,” Hoagland said. “But I still went up with aggressive takes just in case she messed up. I tried to be ready for those.”

Kansas isn’t the only team walking her this year, though. Everyone is. Hoagland is on a record pace for the number of walks she has drawn. Thirty-one walks in the 31 days of March. Or in terms of games, 31 walks in 19 games.

“I have a new approach,” Hoagland said at the beginning of the year. “I’ll be seeing the ball better, loading different — no big physical changes but a whole different mental outlook.”

And not only did she work on this approach throughout the off-season, but also during the season.

“I do feel like the vision training has been helping a lot,” Hoagland said. “I think that maturing, being a senior and understanding how the game works, knowing it’s a game within a game, has changed my mentality about all of it.”

Hoagland, behind her good eye, is beginning to make history. The Big 12 all-time season walk record is 56. Hoagland has 16 currently scheduled games left to break this record and currently has 50 walks on the season.

Now, pair that 1.39 walks a game average with her .470 batting average and you get a .669 on-base percentage, which leads the nation. If the pace holds up, it will be yet another Big 12 record.

Then pair that .669 on-base percentage with a powerful swing, and you have a force to be reckoned with.

Maybe that’s why Kansas wouldn’t pitch to her.

The stats and accolades are piling up for Hoagland as her great career winds down. But more than anything, her team is winning and feeling good.

“I was just having this conversation with Kim [Bruins],” Hoagland said. “We looked at the schedule, and the season is almost over. It doesn’t feel like we are that far into the season. At this time in the season previously, it felt like a grind. This time around it feels like a steady incline.”