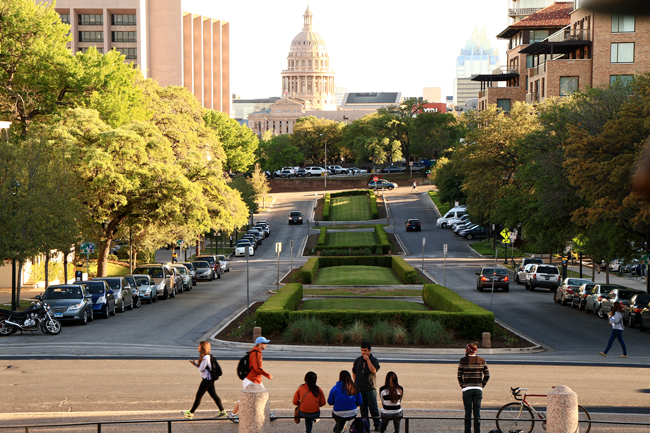 The University median located between 21st St. and Martin Luther King Blvd. won the 2012 Turf Landscape Maintenance Award by the Texas Turfgrass Association for sustaining its landscape by organic methods.

The medians on University Avenue between 21st Street and Martin Luther King Jr. Boulevard are officially award-winning, all thanks to UT’s Landscape Services.

The service team, overseen by supervisor Mike Wallick, was awarded the 2012 Turf Landscape Maintenance Award by the Texas Turfgrass Association in the 10,000 square feet-and-
above category.

“The award was for the way we installed and are maintaining that landscape,” Facilities Services spokesperson Laurie Lentz said. “The challenging aspect of maintaining this site is its high visibility and prominence as a visual corridor between the capitol and the UT Tower.”

Lentz said the landscape on University Avenue is maintained with sustainable methods, including organic fertilizer and an upgraded irrigation system.

“[The landscape] reflects well on the University as the whole,” Lentz said. “It underscores the University’s commitment to stewardship and conservation of resources.”

Wallick said he began work on the University Avenue landscape in 2008 with the renovation of the medians.

“I’ve been involved in landscape management for 40 years,” Wallick said. “I guess I’m just one of those people that likes to play in the dirt.”

Wallick said in addition to using only organic fertilizer, Landscape Services prioritized the sustainability of the project by the converting the existing cross-campus irrigation system into a centralized control system in 2011. The new system has the capability to detect breaks in the piping and sensors that automatically shut off irrigation during rainfall.

“Sustainability is a big buzz word these days. It gets a lot of play but not a lot of follow-through,” Wallick said. “We are constantly trying to figure out ways to be more efficient as we do our job and to conserve resources.”

Justin Hayes has been the crew leader of Landscape Services for 15 years. Hayes said he wakes up at 4 a.m. during the week so he can begin his eight-hour workday by 6 a.m.

“Landscaping is very physical in the first place,” Hayes said. “You have to mentally know that you’ll be able to take the heat and be able to work and stay hydrated.”

Despite the intense labor and Texas heat in the summer, Hayes said receiving the maintenance award was an extra reward for the work he and his four-member team do. He said receiving words of thanks and seeing students lying on the grass and enjoying the sun help the team carry on.

“It’s nice to know that your job makes a difference that way,” Hayes said.