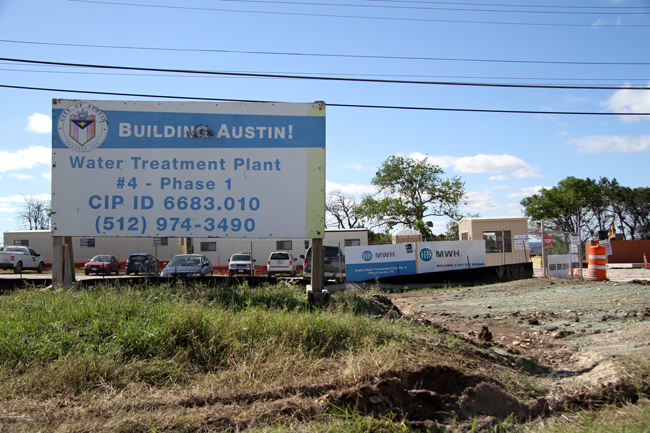 Water Treatment Plant 4, the only plant to draw water from Lake Travis, received an extra $15.5 million dollars in December 2012 for the completion of the project and is expected to be completed in 2014.

The City of Austin reported its new water treatment plant is on track for completion following a decision last December by the City Council to grant extra $15 million to the project.

Water Treatment Plant 4, a project that started in 2009, will be the city’s third water treatment plant and the only plant to draw water from Lake Travis. The city’s other two plants draw water from Lake Austin. Austin Water released an update Monday saying the treatment plant is now more than halfway complete. The plant will serve the north and northwest areas of Austin and have the ability to treat 50 million gallons of water per day with the possibility of expansion of up to 300 million gallons per day.

“Things are on track to be completed by 2014,” Mayfield said. “We’re doing a lot of work inside — structural work and equipment that will clean the water inside. There is work still being done on the Jollyville tunnel.”

In December 2012 the City Council approved an extra $15.5 million dollars for the project, bringing total project costs to $523.5 million. Michael McGill, chief of staff for Mayor Pro Tem Sheryl Cole, said the council did not initially expect to allocate these additional funds.

“Last fall we got the update that they were in need of additional funds to complete the project, so that was something that came as a surprise to members of council based on the way we structured the project several years ago,” McGill said. “It’s impressive that they were able to keep this project so close to half a billion dollars, so some credit is due, though it’s not great that we went over on some of the costs.”

McGill said that while the plant is currently a huge project, the city is still hoping to find ways to conserve more water while it is treating more.

“How do we make sure we conserve water in ever greater amounts so that we don’t need to suck dry those lakes?” McGill said. “That’s a challenge. It’s a behavioral change on an individual level. [The plant] is the largest capital project in the city’s history, so it’s certainly something we’re paying a lot of attention to.”

After the plant is completed, McGill said, the council has many other water issues they hope to address.