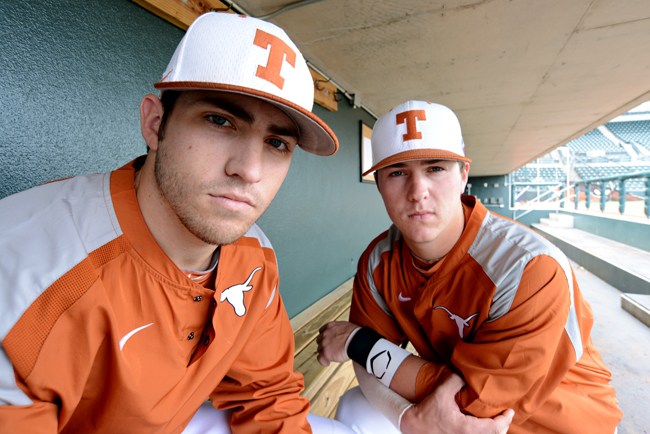 Brothers Ty and Brooks Marlow are becoming key players for the Texas Longhorns. The two have played together all of their lives, and Ty’s transfer to Texas this season provides constructive competition when Ty is on the mound and Brooks is in the middle infield.

Ty and Brooks Marlow are used to the good natured teasing that comes with all the attention. After all, the brother angle has been exploited many times throughout their lives, especially when you add in their older brother Zach who used to play ball for Texas A&M University.

“They’re just jealous,” Brooks Marlow laughed. “Everybody gives us a hard time when people interview us together. We’re just having fun with it.”

Brooks has been at Texas for two years now, starting at second base as a freshman. Ty, however, transferred to the Longhorns at the start of his junior year after a year at Texas A&M and one at McClennan Community College. The two have been playing together since they first started in little league, and appreciate the familiarity of having each other on the field.

“It feels normal being back here, playing with him. It feels good,” Ty said. “We’ve always played together.”

Although the brothers originally went to rival colleges, there was never any animosity between the two. However, they never got a chance to play each other in college before Ty transferred from Texas A&M after his freshman year. They joked that there may have been some competition had they actually faced each other.

Ty considers himself to be the more reserved and responsible older brother, especially around Brooks. He claims that his job is to keep Brooks, who is the comedian in the family, in line. But they both feed off each other and keep each other honest both on and off of the field.

“Being the older brother, I feel like that’s my job,” Ty explained. “To go out there and get my work done and always watch out for him. I know when to straighten him up.”

While at Texas, Ty has been an important middle reliever for the Longhorns. So far this season, he has posted a 2.70 ERA and a 1-1 record on the mound.

Although he didn’t begin the season starting for the Longhorns, Brooks has cemented himself as an important part of the starting lineup at second base, continuing his role from freshman year. Brooks has a .185 average on the season with three RBIs and a home run.

Both confess to a competitive relationship, however, they claim that it has only helped them improve their game. Despite playing together since they were little and living together now in college, the two have never gotten tired of each other.

The Longhorns will host perhaps their most important series of the season when No. 14 Oklahoma comes to Austin this weekend. Texas has yet to win a Big 12 conference series this year, going 2-1 in contests against both Texas Tech and Oklahoma State.

“We are all brothers on this team, but me and Brooks have a strong chemistry,” Ty said. “Me and him together are a lot stronger, going out there to pitch and knowing your brother is at second base and he is going to do everything he can to stop the ball.”