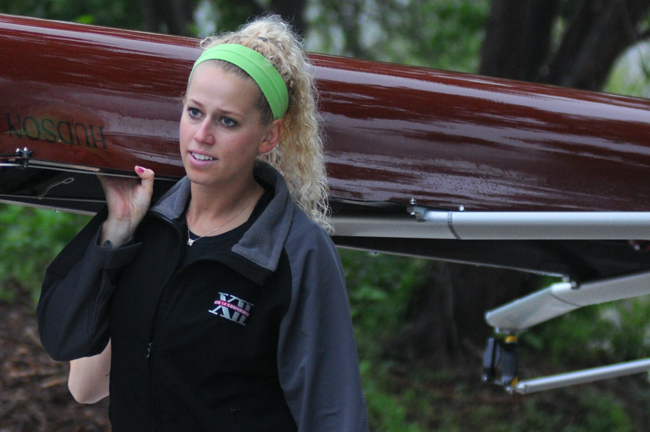 Laurel McCraig has earned her stripes as a rower in her three years at Texas, claiming three awards for excellence last year.

Laurel sits comfortably in the locker room after just getting her boat off the water.

“I cried my first rowing practice. I was literally forced in to the sport by my family. Both my dad and uncle rowed at my high school so even though I would have rather been running track and field, I was going to be a rower,” Laurel McCaig said.

McCaig, senior and captain of the varsity Texas team, counts the weeks to her graduation as her last season is already beginning to pass before her eyes. For Laurel, rowing has become not only a routine, but a blessing and consistent positive influence in her life as well.

“You just have a sense of purpose when you row, your accountability is higher and knowing that you serve such a huge role for the team is really rewarding,” McCaig said. “It’s unlike any other sport I’ve been a part of.”

McCaig quickly found her natural rhythm as she held a seat in the top boat her entire high school career. Not long after her success she realized she wanted to pursue rowing in college.

“I looked at some schools in the North East, but I wanted a big school in the city,” McCaig said. “Somewhere that focused largely on sports and somewhere with a lot [of] sun for tanning, and some really good Mexican food.”

The senior has come a long way from Carver, Mass. In the past year, she has made quite a statement, claiming 2012 first team All-Big 12 (First Team), 2012 CRCA All-South Region (Second Team), 2012 Academic All-Big 12 (Second Team) and was even a member of Big 12 Commissioner’s Honor Roll last fall.

“Laurel’s always pushing. She works well through adversity, both within herself and her teammates. She’s very determined, and most of all, team oriented,” head coach Carie Graves said. “I remember once after a bad day on the rowing machines she came up to me and told me that she felt like she was letting the team down. It’s not often you come across an athlete that’s solely invested in her team’s wellbeing over her own.”

Along with her coach, McCaig’s teammates also see and respect their fearless leader as a valued captain and friend. A bittersweet season last spring draws a sigh from her as she talks about this weekend’s Crew Classic in San Diego. Aside from always wanting to perform better than a previous race, Texas hopes that this is the next step of progression into getting faster.

“We want to improve from the Longhorn Invite. It wasn’t where we wanted to be,” McCaig said. “This week we’ve been working on the fluidity and natural rhythm of the boat. Last race we kind of lost ourselves. We’re looking to maximize how we hit the power.”

McCaig shifts herself on the bench as she talks about racing. It’s no secret that even talking about a race excites her. But what is her routine before a race?

“She cleans the boat!” teammate Melanie Eckert yells across the room.

“I do, I clean the boat. I really just like to chill out before a race,” McCaig said. “I like to talk and keep it really casual so my teammates don’t get so worked up. Rowing is so simple. You row as hard as possible.”

For McCaig, her spring season is what is most important to her right now. Future plans for after graduation still remain undecided as she holds on to her final races with Texas.

“I may have an opportunity to row in London while getting my masters,” McCaig said. “Or just enjoy Austin a little longer and get a job.”

Although it may seem unclear where her future is after this season, there’s no doubting that her opportunities are endless.