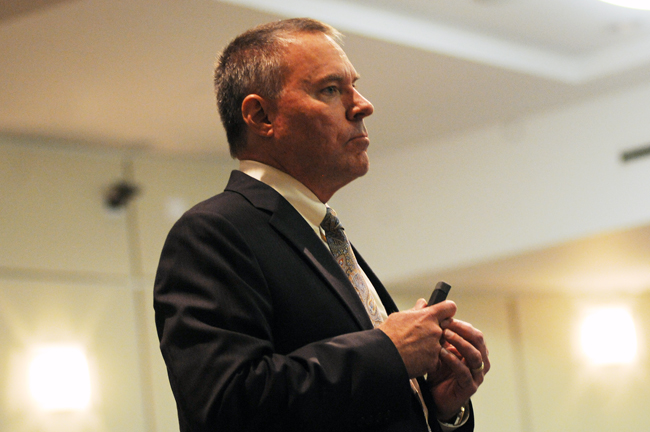 David Carter, assistant chief of APD and one of four candidates for the position of UTPD chief, spoke Friday on his plans for UTPD if he is selected. Carter said he will focus on creating a strong relationship between APD and UTPD so they can accomplish their two main goals — keeping the community safe and creating a community-wide perception of safety.

He said he will try to ensure police are perceived on campus as outstanding and to build trust between the community and police officers. Carter said he also plans to reach out to campus organizations.

University operations spokeswoman Rhonda Weldon is a member of a committee of more than 20 students, faculty and staff evaluating potential candidates for the position. Weldon said after looking through the applications, the committee narrowed the choices to seven applicants, which Michael Lauderdale, committee chairman and criminal justice professor, narrowed down to four.

Weldon said Carter appealed to her because he has both municipal and University-related backgrounds.

“UT being in such an urban setting, our department representatives work closely with our partners in Central Texas,” Weldon said. “The Sherriff’s department, APD, DPS, they train together, there are large events, there’s large-scale partnering. I was looking for someone who knows how to navigate that.”

“I tend never really to see them unless it’s around the nighttime and they are in their squad cars,” Martinez said. “I haven’t really had to deal with any of them, thankfully, but it would be nice to be reminded that they are on campus.”

Carter is vying to replace Robert Dahlstrom, the current UTPD chief, who is retiring next month. The other three candidates are Melissa Zak, Los Angeles Police Department captain; John McCandless, Miami University Police Department chief; and APD assistant chief Raul Munguia. Carter is the first to speak, and each candidate will speak about their plans on campus to students, faculty and staff throughout the month.