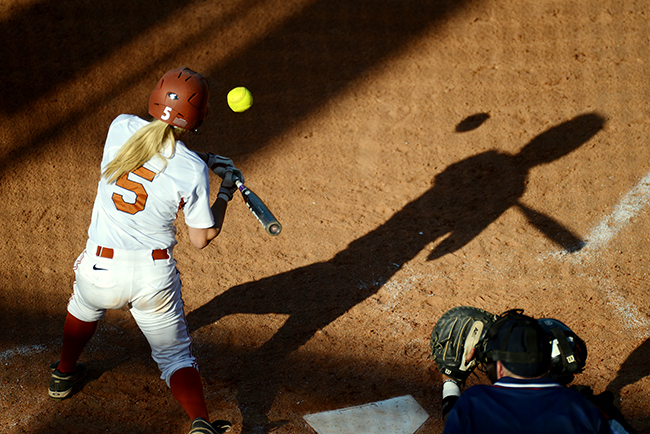 Catcher Mandy Ogle takes a swing at the plate during Sunday’s match up against the Hilltoppers.

With two wins over Western Kentucky this weekend, No. 8 Texas rose to 35-4 as Blaire Luna’s Saturday showing featured six innings of perfection followed by a seventh-inning walk. She struck out 16 batters in the match including eight of her first nine opponents, marking only the third time Texas has tossed consecutive no-hitters.

“It was really close the last inning. I was kind of nervous going out there so I maybe just overthought it a little bit too much,” Luna said. “Overall I’m glad we did get the win. That’s the most important thing and Mandy [Ogle] did a really good job of mixing it up back there.”

As Ogle helped keep the defense in check, Karina Scott showed the Lady Toppers what power looks like. Five scoreless innings allowed pitcher Emily Rousseau to avoid a series of near runs, but with Kim Bruins, Rachel Scott and Ogle loading the bases, Karina Scott shattered a Rousseau throw for a grand slam. The Longhorns filled the bases once more but did not advance.

“This whole season for me has just been a little struggle but throughout this whole week, I felt good,” Karina Scott said. “I felt like my swing was coming back. That was just a big relief and getting the opportunity to show everyone what I’m capable of tonight was great.”

Confident with the 4-0 victory, Holly Kern took the mound Sunday to extend Texas’ consecutive hitless innings to a program record 20 and one-third innings. Even after Mallorie Sulaski connected to break the streak, Kern did not walk a batter and allowed just one unearned run in her fifth complete game of the season.

“She is moving in the right direction,” head coach Connie Clark said. “She has been making strides, getting stronger and has made some adjustments mechanically as well that have helped her accuracy and velocity. I love where she is at. She is a beast, and I mean that in a great way.”

The Longhorns scored all three runs necessary to win in the third, after Taylor Hoagland’s 51st walk of the season tied her for fourth on the Big 12 single-season record list. Stephanie Ceo and Brejae Washington both reached on walks.