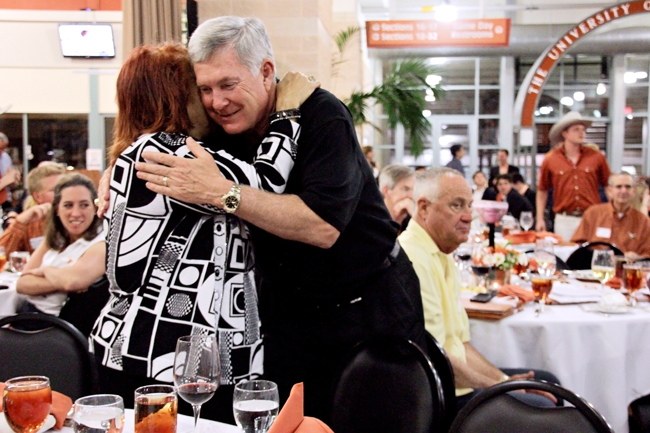 UT athletics coaches and former athletes gathered with guests of the 13th annual Dine with a Coach event, featuring a live auction to celebrate and raise funds for the work of Neighborhood Longhorns Program.

According to Vincent, this is one of the three signature events for the Neighborhood Longhorns Program and it raises money to provide academic incentives to students who go to title one schools in the Austin Independent School District.

“Over the years we have served over 80,000 students,” Vincent said. “We have been able to provide tutoring academic incentives and for many of these neighborhood Longhorns, the opportunity to visit the 40 Acres for the first time. Through community support, we make this campus real to them.”

The event included appearances by Bevo, the Longhorn Band, Texas Cheer and Pom and four Neighborhood Longhorns kids themselves. The program auctioned off a chance to spend a day under the football instruction of Colt McCoy and his friends or a plane ride with stunt pilot David Martin.

Government junior Chase Jubinsky said he worked for the admissions office of the program and helped with one of their events this spring.

“We helped coordinate bringing an admissions speaker to their event and we gave some tours to some middle school kids who were visiting campus,” Jubinsky said. “It’s great to see all of the coaches in one giant community today.”

Vincent said the coaches attended the event to work with the supporters of the program and to match their interests. He said it is a great opportunity for some of these guests and supporters to connect with the coaches.

“This program was really structured within the heart of our student athletes, many of whom their first chance to go to college was because someone gave them a chance or was their mentor or inspiration,” Plonsky said. “Mack [Brown] has this great phrase. ‘We want to win as many games as we can, all of them if possible, with respectful responsible young people who graduate.’”

Plonsky said the work of the program sends a message throughout the nation about the mission of the University.

“[We support the program] because that’s what we hope we’re sending in terms of the signal about what we’re accomplishing at the University of Texas,” Plonsky said.

Printed on Tuesday, April 9, 2013 as: Dining for education