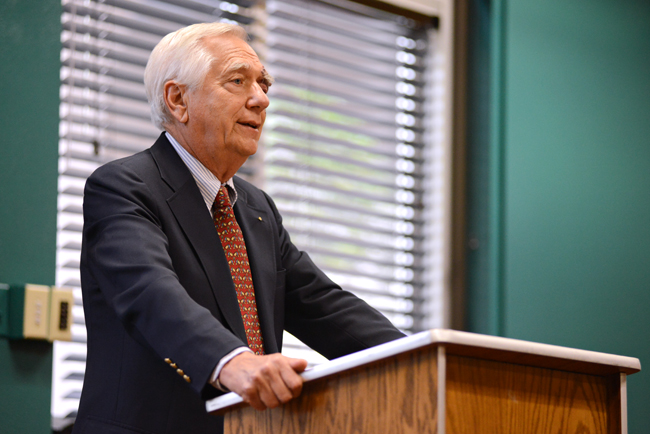 Charles Moyer, the first Secretary of the Inter-American Court for human rights, spoke to the school of law Monday evening. Moyer said while the commission has had an extensive effect, politics and financial instability have weakened the commission’s role. " />

Charles Moyer, the first Secretary of the Inter-American Court for human rights, spoke to the school of law Monday evening. Moyer said while the commission has had an extensive effect, politics and financial instability have weakened the commission’s role.

The Inter-American Commission of Human Rights has had a large and positive effect on human rights in the Americas, but has weakened in recent years, according to human rights experts.

Charlie Moyer, who spoke at the School of Law on Monday evening, began working for the commission in the early 1970s and was eventually elected to be the first secretary of the Inter-American Court of Human Rights. Both the commission and the court are subsidiaries of the Organization of American States, which works to promote peace and collaboration between 35 states in North and South America.

The commission was founded in 1959 to promote and protect human rights. Moyer said the commission became more powerful by expanding its role beyond what had been originally intended by its parent organization, the Organization of American States.

“That period from the Pinochet coup to the end of the ‘70s, the commission, with astuteness, laid a base for the years to come,” Moyer said.

The representatives of the commission decided to accept complaints from individuals, not just organizations, which “opened the door for a much more protective system.” The commission also began making visits to countries with the intent of investigating human rights complaints, rather than only visiting to promote
human rights.

“When the statute was written, the visits were meant to promote human rights, not investigate,” Moyer said. “But the commission simply decided to ignore the underlying meaning of the statute and make visits.”

But recently, political maneuvering and an insufficient budget have decreased the power of the commission.

Law professor Ariel Dulitzky, who also spoke at the event, said the commission currently has difficulties because all American countries do not share the same definition of a human rights violation. Dulitzky also called for the commission to update its methods and the issues upon which it places focus.

“The commission is facing a crisis because it has not adapted to the new advances in technology and communication that have happened in the past two decades,” Dulitzky said. “There are new issues related to poverty and inequality in South America, issues of violence committed by primary actors rather than state actors, issues provoked by destructive industries from private companies going to Latin America and destroying the environment, displacing people from their traditional lands.”

Lalini Pedris, international relations and global studies senior who attended the event, said although she didn’t have extensive knowledge about the topics Moyer and Dublitzky discussed, she thinks there are still more issues to be addressed.

“I think there’s still a lot of work left to be done,” Pedris said. “But I think the way the human rights discourse has adapted to modernization has made it more beneficial.”