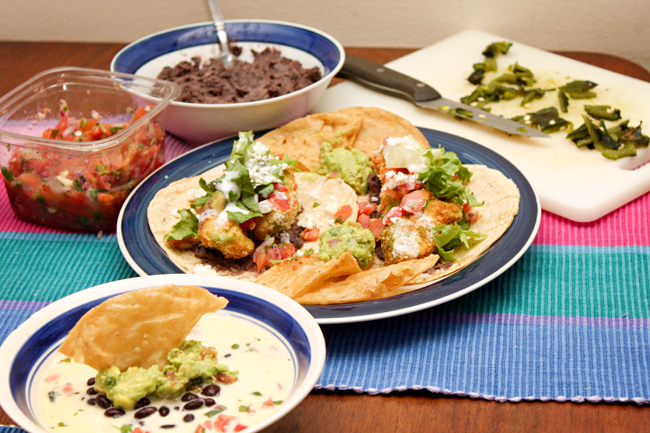 Classic Austin dishes like Torchy’s fried avocado tacos and Kerby queso can be easily made at home. Recreating these dishes yourself is an easy way to save money when you’re low on funds.  " />

Classic Austin dishes like Torchy’s fried avocado tacos and Kerby queso can be easily made at home. Recreating these dishes yourself is an easy way to save money when you’re low on funds.

My traditional method of treating myself is to drop money at one of Austin’s many amazing restaurants. But, it’s the end of the semester. The line on my budget for dining out needs some downsizing. Which is why I decided to attempt to recreate the classic Austin dishes I can no longer afford on my own.

What exactly do I mean by “recreating classic Austin dishes”? I mean cooking at home, in your own kitchen, dishes you used to have to drive to a specific restaurant for. In this case, those dishes are: Kerbey Lane’s Kerbey Queso, Torchy’s Tacos’ fried avocado tacos, and Amy’s Mexican vanilla ice cream.

The first step in recreating restaurant-quality meals at home is to co-opt a friend who’s a better cook than you into helping. This can be done a number of ways: bribing them with Shiner, telling them you’ll pay for groceries, or just leaving them voicemails every hour until they agree.

The second step, then, was recipe development, which meant looking at the menus of the respective restaurants to make sure we’d gotten all the ingredients you would usually expect to come with the dishes we were recreating. For example, a Torchy’s fried-avocado taco without poblano sauce just isn’t a convincing replacement. As our experience will show, you might also want to consult a cookbook. But hey, who said you have to draw inside the established culinary lines?

At the grocery store, we stocked up on avocados and cut costs by picking ingredients that could be used in all three dishes. I cream-thinned the queso and formed the base of the poblano sauce for the tacos, which became the main ingredient in the Amy’s Vanilla ice cream. El Milagro corn tortillas were used in the tacos and the tortilla chips. The poblano pepper seasoned both the taco sauce and the queso.

Once inside the front door, we got to work. We only had an hour to cook, so we started chopping lettuce and slicing avocados immediately. Keep the avocados thinly sliced because you want a low volume-to-surface-area ratio to maximize crunch in your fried avocado tacos.

While one of us sliced avocados, the other popped a poblano pepper onto the top rack of the oven and set it to broil for 10 to 15 minutes, until the skin was charred and slightly peeling.

We battered the avocados by dipping them consecutively in flour, buttermilk and panko breadcrumbs. We then fried them in an inch of peanut oil. We kept the oil at a steady 350 degrees, but if you don’t have a thermometer, heat the oil till it bubbles but doesn’t smoke.

For the queso, we melted a half-pound of queso blanco, a half-cup of shredded Monterrey jack, and a splash of Shiner beer in a double broiler. In our case, “double-broiler” meant a big pot filled with boiling water with a smaller pot hanging by its handle on top. This was the part where we should have consulted a cookbook: Our cheese ended up separated into big, gooey chunks and white liquid. It looked disgusting, but it had a much better flavor than the Kerbey Queso we were trying to recreate. When you try it at home, don’t be afraid to use the microwave to smooth it out.

After we charred the poblano, we placed it in a plastic bag to “sweat” for 10 minutes, until the skin peeled off easily. We removed the skin, chopped it finely and used it to season the queso. We whipped the poblano with cream and ranch dressing flavoring over ice to form the taco sauce.

In sum, the ingredients cost a total of $60, but we were able to feed three people with food left over. The conclusion? Next time you need to treat yourself, head to the grocery store, not the nearest restaurant, and make enough food to treat yourself for the whole week.