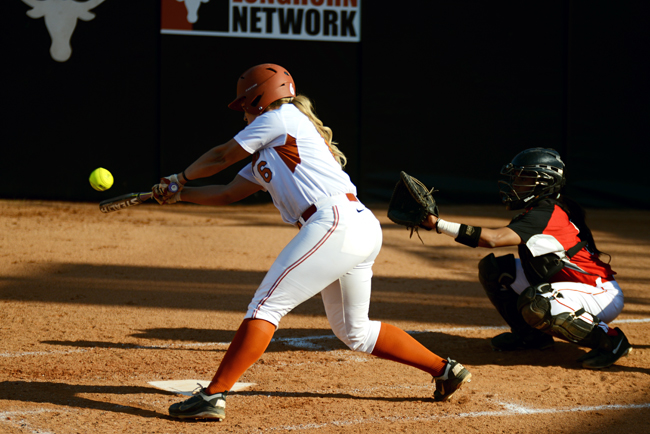 Senior Taylor Hoagland leads the thunderous Longhorn lineup with a .451 batting average and 51 walks this year.

The No. 6 Longhorns (35-4) will welcome Iowa State (18-19) to Red and Charline McCombs field this weekend for a three-game series as the first of five straight series against Big 12 opponents to end the season.

The Cyclones have struggled this season, losing games to smaller schools such as IPFW, UTSA, Valparaiso and Florida Gulf Coast. Then, in their first conference series, they were swept by Baylor.

But Iowa State has bounced back recently, sweeping Oklahoma State to even out its conference record at 3-3, and defeating Drake. They now come to Austin with a little momentum, riding a four-game winning streak.

The momentum might not be enough, though, as they face an even hotter team in Texas, which has won 12 in a row.

At the plate, Texas hitters should dominate against the worst pitching team in the Big 12. Iowa State has a 6.22 team ERA and not one pitcher that boasts an ERA better than any of Texas’ four pitchers.

In the circle, Texas may have even a bigger advantage. The nation’s second-best pitching team will look to stymie the Cyclones at the plate the way they’ve done with other teams recently. Blaire Luna (19-1), who boasts a team-best 1.04 ERA, shouldn’t have much to worry about against Iowa State and their .301 team batting average. While a few Cyclones do have decent batting averages, there isn’t one Cyclone hitter that stands out.

Not only does Texas have more talent, but Iowa State has struggled mightily on the road, where it’s 0-10 this season.

As for the Longhorns, they look to improve upon their perfect 5-0 conference record. Only once has a Texas team started Big 12 play 7-0, and the Longhorns have a golden opportunity to do it this year.

This week, Luna and Taylor Hoagland were both selected as two of the top 25 finalists for the Amateur Softball Association of America’s 2013 USA Softball Collegiate Player of the Year, the most prestigious award in DI softball.

Hoagland leads the nation in on-base percentage (.648) and walks (51) while boasting a .451 batting average, while Luna is seventh in ERA and leads the nation in strikeouts per seven innings (12.9). Luna, who’s gone 99-24 in four seasons with the Longhorns, will also be looking to pick up career win No. 100 this weekend.