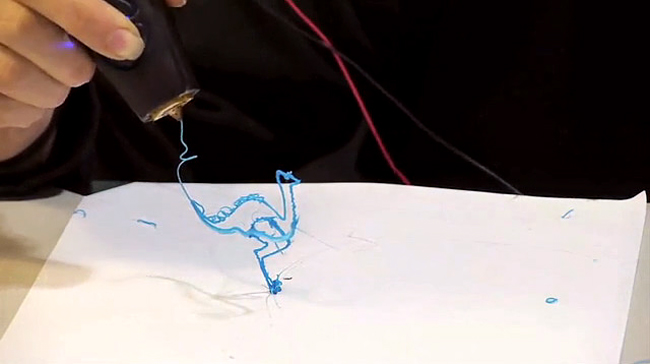 With the new “3Doodler,” writers will no longer be confined to a mere two dimensions when presenting their ideas.

Thanks to tech entrepreneurs Peter Dilworth and Max Bogue, consumers will no longer have to be confined to a mere two dimensions when writing down their ideas. With the help of the “3Doodler,” a device that melts ABS plastic that is commonly used in 3-D printers, pen-wielders will be able to draw in any direction they choose. The heated end of the pen liquefies and rapidly cools the plastic to make this possible. The 3Doodler is expected to be available for approximately $99 next holiday season.

Google & AT&T Fiber Cable in Austin
Within the past week, both Google and AT&T have committed to building two respective fiber networks in the city of Austin. While the companies have asserted that this competition will benefit consumers in the long run, reality has yet to set in. Before a cable is to be laid down, Google and AT&T will use customer demand to determine which streets will have access to their new services. However, since the demand will now be split between two separate companies, this discernment process may become more opaque, leaving interested customers without access. Similarly, these services will face challenges in targeting lower-income parts of the city where landlords and rented properties are more common.

Apple Ban
“AppGratis,” a free application on the iTunes App Store with approximately 12 million users, was forcibly removed from Apple’s website last weekend. The app, which helps consumers find other free apps and price-deals on iTunes, will no longer be available for download. Current owners, however, will continue to receive updates, according to the company’s CEO, Simon Dawlat. This recent withdrawal represents a broader crackdown on violations of Apple’s historically stringent developer policies. Apps that advertise or promote other apps will also be taken down if this feature is not changed, since they threaten the Apple Store’s legitimacy as the proprietor.

Far Cry 3 goes retro
Filled with inane references to the 1980s and an apt retro soundtrack, “Far Cry 3 Blood Dragon” is a new downloadable content package from Ubisoft that will be available May 1. Using the same graphics engine from “Far Cry 3,” this new content will have gamers play through a sci-fi story set in the distant future of 2007. Armed with ninja stars and photon blasters, players will venture through a dystopian nuclear wasteland with the hopes of finally disarming the oppressing enemy. While it bears the same name as the original game, “Far Cry 3 Blood Dragon” will be in no way related to its proprietary game title, simply representing Ubisoft’s interest in branching off to something new.

Shodan Search Engine
From traffic cameras to nuclear power plant controls, the Shodan Search Engine is capable of finding any hardware that is connected to the internet. For devices that have default passwords, such as “1234” or “password,” this site even allows users to connect and use them. While this search engine has rather dangerous implications for people with harmful intentions, it may help improve online security in the next few years by highlighting technical failures of lazy companies. As the Shodan Search Engine demonstrates, IT departments and private internet users skimp on even basic levels of security because they believe that there is safety in numbers or “security by obscurity.” But Shodan now makes it possible to specifically search for these vulnerable devices all over the world.