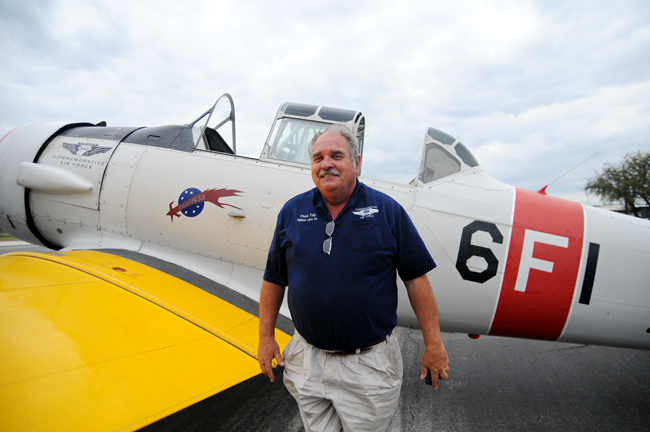 Col. Chuck Tully, a member of the Highland Lakes Squadron Commemorative Air Force, shows a restored U.S. Navy training plane in Burnet. The squadron is preparing for The Bluebonnet Air Show, which will include a four-hour display of the squadron’s aircraft, a series of acrobatics and a pyrotechnic display.

Just northwest of Austin lies Burnet, a small and relatively quiet city. Churches dot the highways, Dairy Queen signs illuminate the sky and the thick stillness of a rural Texas town can be felt like syrup in the air around you.

The only interruption to the otherwise serene atmosphere is when Col. Chuck Tully flies a restored U.S. Navy training plane over Highway 281. The buzz of the 70-year-old engine fills the air and the brightly painted tail weaves a technicolor trail through the sky, much like it did when it was used to prepare World War II Navy pilots for departure.

Tully is a member of the Highland Lakes Squadron Commemorative Air Force, a group of men and women dedicated to collecting and restoring combat aircraft and maintaining a museum to display memorabilia to the public.

On this particular Saturday afternoon, Tully and a few of his fellow squadron members were hanging out in their hangar, which doubles as their museum, at the Burnet Municipal Airport. The hangar is filled with a small array of old combat and training planes, some of which have been restored and others that are still in the process of being rebuilt.

Tully offered us a rare opportunity to fly inside and co-pilot the small SNJ-4 aircraft, which was built in 1943 and served as the final training plane for Navy pilots preparing for deployment.

As I stepped into the second seat in the aircraft, Tully walked me through the pre-flight procedures before encountering some technical difficulties. He taxied the plane back to the hangar, and a few members of the squadron gathered around with a ladder to help fix the aircraft.

“Because we get to work on the airplanes and fly the airplanes, it gives us a little bit better sense of what those guys were dealing with,” aviation enthusiast Michael Kilgore said.

After a few minutes of fiddling with the nose of the aircraft, the World War II trainer plane was ready for flight.

Having never flown in anything other than a commercial jet before, the sensation of being in the air in such a small aircraft was new to me. Tully narrated the entire flight, offering scenarios the men who flied the plane in 1943 might have encountered.

I expected the ride to feel similar to a roller coaster, but it was actually very smooth. At one point, Tully’s fuzzy voice came through the headset I was required to wear to let me know that I now had control of the aircraft.

After only a few moments of having control, it was easy to see why the members of the Commemorative Air Force were so dedicated to preserving these machines.

The steady buzz of the plane was filling the air, and instead of sounding loud and menacing, it served as a not-so-subtle reminder that we were flying a few hundred feet above the ground.

The squadron was at the hangar that Saturday to continue preparations for the annual Bluebonnet Air Show, which will take place Saturday, April 13 from noon to 4 p.m.

The air show is a four-hour display of the squadron’s aircraft alongside visiting aircraft from other groups. The show includes a series of acrobatics and a pyrotechnic display from The Blastards, a pyrotechnic group.

“We’ll also have some reenactors here that will be in full World War II regalia,” Col. Ed Holley said. “Some of the guys really get into it and come in character.”

Holley said the show offers something for people of any age, but to him, the most important aspect is the history.

“The whole purpose of this is to get the history out there so you don’t repeat it,” Holley said. “And wars are things you don’t want to repeat.”