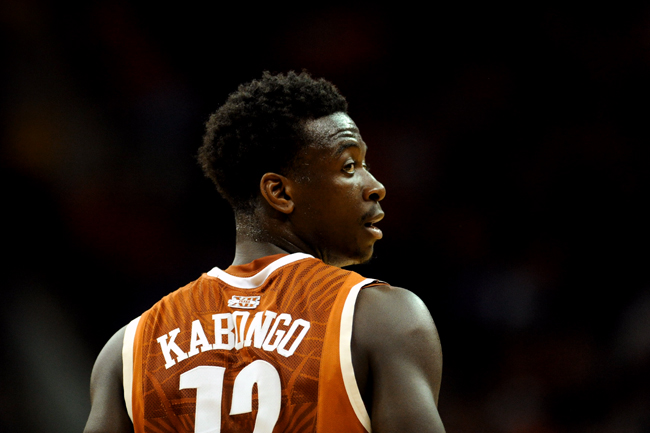 Myck Kabongo declared for the NBA Draft on Friday, leaving Texas in his rear view mirror after two seasons with the Longhorns, the last of which was shortened by a 23-game suspension. Over the course of his career, Kabongo played in 45 games, averaging 10.8 points and 5.3 assists per game, while shooting 40 percent from the floor. Daily Texan file photo.

Myck Kabongo played 45 games, averaged 10.8 points and 5.3 assists per game while shooting 40 percent from the floor during his Texas career.

But there’s one number that people will remember when looking back on Kabongo’s Longhorns career: 23.

After turning down the NBA to return to Texas for his sophomore season, Kabongo was suspended 23 games by the NCAA for receiving impermissible benefits related to a flight to Cleveland last offseason and lying about it to school officials. When asked if there was anything he would do differently during his two years at Texas, Kabongo was quick with his answer.

“I would not have taken that trip to Cleveland,” Kabongo said.

Kabongo announced Friday that he was foregoing his final two years of eligibility at Texas to declare for the NBA Draft. He becomes the latest in a long line of Longhorns to leave the program early. J’Covan Brown left after his junior year last season while Jordan Hamilton, Cory Joseph and Tristan Thompson left early the year before that.

“In life, you have to make tough decisions and this is probably one of the toughest decisions I’ll ever have to make,” Kabongo said. “I talked to God and to my mom, and they were really the only people I needed to talk to about it. I’m just excited for this next stage in life.”

Before the team banquet Thursday night, head coach Rick Barnes admitted that he went into this season expecting it to be Kabongo’s last at Texas. His Longhorns went 10-13 without Kabongo this year and 6-5 with him, the final defeat coming in a first-round loss to Houston in the CBI.

“Our staff wishes Myck and his family success as he moves forward,” Barnes said in a statement Friday. “We are so proud of the way Myck handled the [suspension]. He is a relentless worker in the gym who strives every day to get better in all phases of the game, and we know that will continue in the future.”

Kabongo earned team MVP honors this year despite playing just 11 games. He averaged 14.6 points, 5.5 assists, 5.0 rebounds and 2.0 steals in 37.3 minutes per game during his suspension-shortened season.

“It was the darkest stage of my life a couple of months ago,” Kabongo said. “I didn’t think I was breaking any rules. I should have been more truthful with our school’s compliance. That was a mistake. A big mistake. But I corrected myself. I was happy that I was very truthful with the NCAA.”

Kabongo’s decision to forego his final two years of eligibility comes on the heels of the departure of two of his Longhorn teammates. The 6-foot-1, 180-pounder from Toronto joins fellow sophomores Sheldon McClellan and Jaylen Bond as those leaving the Texas program after two years.

McClellan, the team’s leading scorer, and Bond both announced their intentions to transfer last month.