Chemical toilets and imaginary bear attacks: a night in the great outdoors 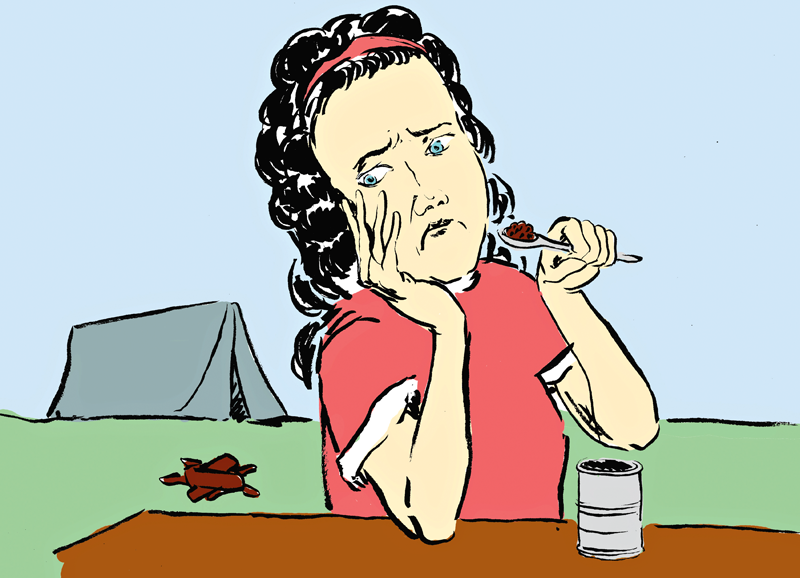 After deciding to backpack across the Grand Canyon this June, I realized I should actually go on a few real camping trips to get myself ready. And in order to be in the mental zone for said adventure, I needed to pee in some chemical toilets.

I spent Saturday night in the primitive camping site at Pedernales Falls State Park. Primitive camping means no running water or electricity. You hike into the site, with everything you need strapped to your back. And because we’re in Texas and prairie grass is flammable, usually you’re not allowed to build fires.

The hike into the site was easy enough. A couple of miles in mild, overcast weather is no big deal. It was once I stopped moving that things became rough.

Let it be known that I am a total weenie when it comes to spending the night outdoors. I’m thoroughly allergic to most pollens and dirts and other natural, grimy things. Hand sanitizer is my best friend, even when I spend the day indoors. Mosquitoes love me, possibly because I’m really just that sweet and wonderful. And the idea of peeing in a hole in the ground that every other person at the site is using is legitimately frightening to me. Chemical toilets and porta potties are horrifying things to behold when they are the only facilities offered.

As I mentioned, I’m fairly allergic to the outdoor air in general. I sneeze many, many times. My tear ducts itched horribly and I inadvertently rubbed a good amount of dirt in my eyes, which made my eyes itch even more. I’m allergic to it all and it’s a never-ending cycle of allergens and itchy eyes. The added Benadryl haze I used to combat my allergies just made the world lava lamp-y and scarier than it should have been. Like, fearing-imaginary-bear-attacks-scary.

And then I realized I had to pee. Wrestling with the overwhelming notion of just how many people have used that one single chemical toilet, I weighed the pros and cons of answering nature’s call. Pros: enclosed space, nearly-civilized, no hole to dig and actual toilet paper. Cons: disease, germs, smell and germs. Casting my over-reaching health concerns to the wayside, the chemical toilet claimed another victim.

Several potty breaks later, the sun went down. In-the-woods darkness is the most intense darkness I’ve experienced, so I made good use of my headlamp. This sounds lame, but a headlamp makes you feel like a unicorn with a horn of light, which is totally awesome. Unfortunately, even my unicorn powers couldn’t spot the orb-weaver web I walked through. It’s funny how you don’t realize you’ve walked through a spider web until the spider is crawling on your shirt.

Headlamps also attract bugs around your face and into your eyes — which are already itchy and covered in bathroom germs that no amount of hand sanitizer can make you forget.

More Benadryl tablets were taken to ensure sleep throughout the night. When I announced that I had tucked my leggings into my socks to “keep snakes out of my pants,” I figured the meds had really taken hold. Visions of bear attacks continued to dance through my head, but Benadryl-induced drowsiness makes a two-mile run back to the parking lot humanly impossible. Eventually my escape plans gave way to sleep.

At the end of it all, I survived my night in the great outdoors. I am alive, despite the bug bites and stuffy nose. I’m reconciling my enjoyment of the outdoors with my difficulty to exist in them. But someone should really do something about those chemical toilets.