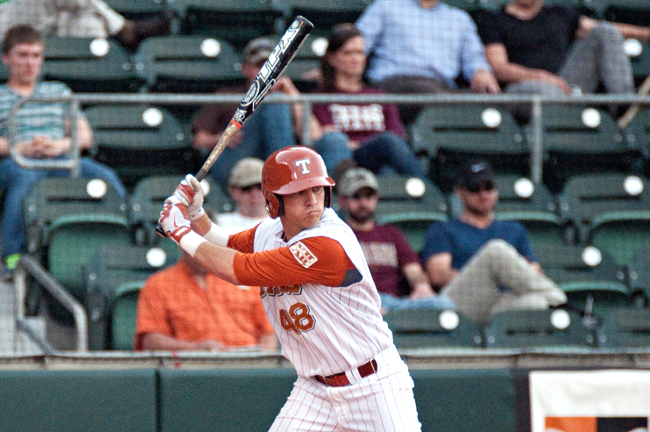 Ty Marlow has split his playing time between first base and the pitcher’s mound this year, sporting a .316 batting average with two home runs and a 2.49 ERA in 25 1/3 innings pitched.  " />

Ty Marlow has split his playing time between first base and the pitcher’s mound this year, sporting a .316 batting average with two home runs and a 2.49 ERA in 25 1/3 innings pitched.

After dropping its fourth conference series in as many tries this weekend in Kansas, Texas returns home Tuesday to kick off a five-game home stand against Texas-Pan American.

Texas takes the field in search of its third consecutive Tuesday night win. The Longhorns could be in good shape to do this, as they have gone 15-6 at UFCU Disch-Falk Field this season compared to 4-9 on the road.

The Longhorns topped Texas-Pan American 6-1 in their first matchup of the year, which took place in Austin on March 5. Third baseman Erich Weiss led the way in the first game with three RBIs, and second baseman Brooks Marlow hit his lone home run of the season.

The Broncs are an improved team since then, however, as they have gone 14-8 since suffering that early season defeat to the Longhorns. They enter Tuesday’s game on a five-game win streak in which they have outscored opponents 40-8.

Josh Urban will take the mound for Texas against the Broncs. The right-hander made his first career start last Tuesday and has recorded a 2.08 ERA with 14 strikeouts in 17.1 innings this season.

Alex Howe could present the biggest problem for Urban, as he has been among the leaders of the Texas-Pan American offense. The outfielder leads the team with 21 RBIs and is second with a .337 batting average and seven extra base hits.

Texas has made a habit of playing in tightly-contested games this season, as two or fewer runs have decided 23 of the team’s 34 games. In addition, the Longhorns have gone 9-7 in one-run games but have gone just 2-4 in their last six one-run contests.

With Sunday’s loss to the Jayhawks, Texas fell to 4-8 in conference play and is tied with Texas Tech for last place in the Big 12. The Longhorns sit four games back of first-place Oklahoma (8-4) and have four series against conference opponents remaining this season.

For now, though, Texas’ focus remains on its upcoming game against Texas-Pan American. Despite their recent hot streak, the Broncs are still 6-12 on the road this season, and the Longhorns will be eager to take advantage of these road struggles.