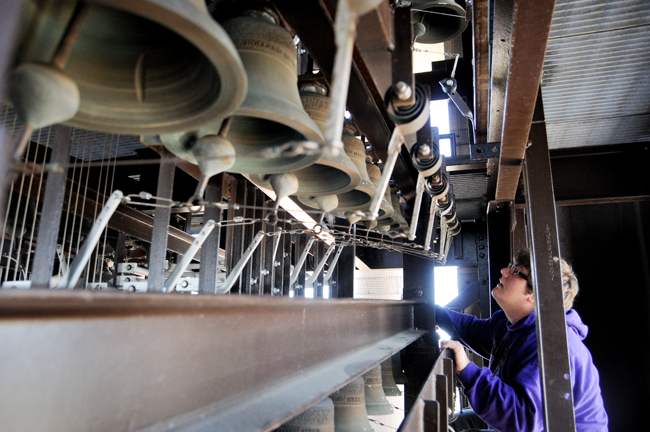 Austin Ferguson, student director for the Guild of Student Carillonneurs, tests the carillon’s bells at the top of the UT Tower.  Ferguson is one of nine students who play the bells throughout the week. " />

Austin Ferguson, student director for the Guild of Student Carillonneurs, tests the carillon’s bells at the top of the UT Tower.  Ferguson is one of nine students who play the bells throughout the week.

Check out Daily Texan Multimedia's video, "Return of the Carillon".

The ringing bells spilling the sweet sound of “The Eyes of Texas” from the UT Tower are playing again after months of silence.

The tower carillon had been out of commission since November to update and refurbish the instrument. The repair cost was estimated at $71,000, after a $331,000 walkway was built around the stacked bells.

Tim Verdin’s family company, Verdin Bells, repaired worn areas and replaced an out-of-date transmission system connecting the bells to the keyboard. Previously, the company installed the second half of the carillon in 1988. Verdin said the largest bells installed in the 1930s caused safety concerns using the original support hardware.

“Basically all the moving parts of the carillon were removed from the Tower and renovated,” Verdin said. “They were stripped down to their main components. Essentially what the University has ended up with is the instrument in the condition it was when it was originally installed in 1988.”

Verdin said 80 percent of the bearings holding the bells up were stiff or immobile and caked with sediment built up over the years. The 56 bells that make up the carillon range from 20 to 7,350 lbs.

“It’s a fairly open tower, so the equipment up there is taking pretty much the full brunt of UV exposure, moisture that’s in the air,” Verdin said. “It rains directly into the Tower, and dust on windy days.”

Music junior Austin Ferguson is the Guild of Student Carillonneurs student director. The guild consists of nine students who play the bells at various times throughout the week. Ferguson said the instrument now has a quicker response time.

“We’re trying to come in and practice to break in all these new parts and get used to it,” Ferguson said. “We try to limit how much we practice up here, though, because the whole campus can hear us.”

Ferguson said he’s heard from many people around campus who were glad to hear the carillon again when the bells were tested for sound quality and the “Westminster Quarter” began tolling every 15 minutes.

“It’s a great tradition that we’re glad to be continuing now that its been greatly enhanced,” Ferguson said. “It makes me feel good that it’s considered such a valuable part of campus and that people care when we’re not there playing.”

Ferguson tweeted Monday night that he would play a “little memorial concert” at 1:45 p.m. Tuesday for the Boston marathon bombing.

Jacy Meador, a music senior and guild member, said playing the carillon is similar to an organ requiring hand and foot playing, but the playing room is higher in the Tower than the clock faces.

“Not many people get to communicate with the entire campus,” Meador said. “When you play something that’s recognizable, especially something like ‘The Eyes of Texas,’ it really draws attention to the instrument and to us, but it’s also really anonymous. No one knows who’s up there playing it.”

Ferguson said he will continue taking requests from people hoping to hear a special song ring from the Tower.

“When I played ‘Call Me Maybe’ last summer it was a lot of fun and got the guild a lot of exposure,” Ferguson said. “In the past few months when it wasn’t [playing] we got a whole lot of requests and we’ll probably get more.”

Song requests can be sent to [email protected]

Printed on Tuesday, April 16, 2013 as Tower carillon back in action after extensive and expensive renovations

Return of the Carillon from The Daily Texan on Vimeo.