D.T. Max discusses use of archives, letters in recent biography 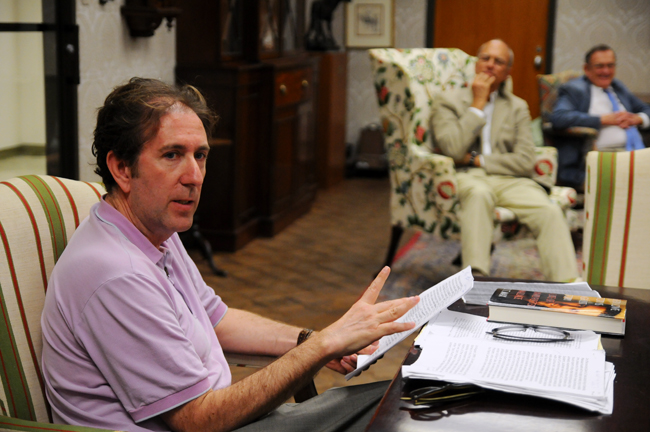 The work of American author David Foster Wallace influenced readers beyond his untimely 2008 suicide. D.T. Max, a staff writer for The New Yorker, discussed his biography of Wallace titled “Every Love Story is a Ghost Story: A Life of David Foster Wallace” on Tuesday with UT students and faculty.

“[Wallace] is a beautiful writer, and I just had a feeling that this was an opportunity that would not come along twice to write about a writer who had so deeply connected to so many readers and even nonreaders,” Max said.

Max said he worked on the biography, which began as an article in The New Yorker, for four years, and he would not have been comfortable writing the biography if he did not have access to Wallace’s letters and archives at the Harry Ransom Center.

“There’s something about a letter that is proof of a person’s state of mind and interest at that moment, even if the actual facts of the letter may be erroneous,” Max said.

Max’s talk was hosted at the Ransom Center as a part of Research Week.

Matthew Valentine, senior program coordinator for the Plan II Honors Program, said in previous years, Research Week primarily showcased scientific work, but organizers are trying to include other forms of research including archival.

Max said many people question why Wallace has few drafts and unpublished works, while many other authors have full novels they choose not to publish.

“One of my suspicions for the book was that David’s first draft was in his head and what we have as a first draft is really kind of a second draft,” Max said.

Wallace committed suicide in 2008, and Max said writing about someone who died so tragically and recently was difficult because everyone is still in grief.

“If a biography does anything, a literary biography, it’s got to make the reading of the work richer,” Max said. “Otherwise, what’s its purpose?”

Students from all areas of study, from biology to philosophy, attended the discussion.

“It really just gave me new insight into Wallace’s life, and also I never really thought about how letters at the [Ransom Center] could be a research resource for students,” English junior Tyler Daelemans said.