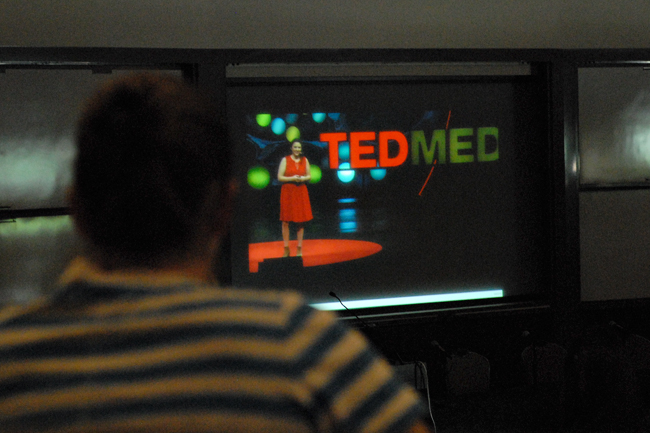 Streamed live to UT students and staff from Washington D.C., this year’s TEDMED conference explored perspectives on modern medicine and health care around the world.

Carolyn Kenny, MBA graduate student and president of the MBA Healthcare Association, which co-hosted the event with TEDxAustin, said TEDMED is an opportunity for viewers to learn about issues in health care directly from an influential collective of researchers.

TED, which stands for Technology, Entertainment and Design, is a set of conferences owned by the nonprofit Sapling Foundation. TED hosts programs around the globe and post lectures online, emphasizing innovative and engaging research presentation.

“The idea behind TEDMED is to bring speakers who are innovators in their field together, and then people together to watch those speakers,” Kenny said. “It’s a big deal because it’s globally dispersed, so the conference is actually in Washington, D.C., but there’s people all around the world in 80 different countries watching the content.”

The conference was streamed at the AT&T Executive Education and Conference Center. In one of many talks, Jonathan Bush, an entrepreneur and CEO of athenahealth, spoke about the relationship between for-profit and nonprofit institutions in health care.

“He was talking about disrupting the idea that once you’re at the top, you have to protect your turf and stay only in that market area, but you know, redefining and enlarging your market,” said Melanie Smith, UT alumna and Austin resident. “I thought that was a great idea.”

Although only day one of the three-day conference was screened, Kenny said students and staff have access to all the content because of UT’s status as a TEDMED flagship affiliate.

“So we are hosting this one day of the event, but because we are a flagship affiliate, we actually are allowing students and staff of the university to have access to the content through Sunday, which is really exciting,” Kenny said.

Shelly Tom, an MBA graduate student and vice president of Austin affairs of the MBA Healthcare Association, said the TEDMED talks are important to the work of MBA students.

“TEDMED, being very forward thinking, challenging conventional thought, is really a great opportunity for us MBA students to understand and listen to what these leaders, these scientists are doing, and how that can impact what we’re doing in our work and in our line of work,” Tom said.

Kenny said she expects there will be more TED screenings in the future.

“This is the second year that the MBA Healthcare Association has hosted TEDMED, and I think that’s something we would like to continue to do in future years because we’re getting lots of positive response from the UT community about it," she said.