After fertilizer explosion, Austinites line up to send blood to West 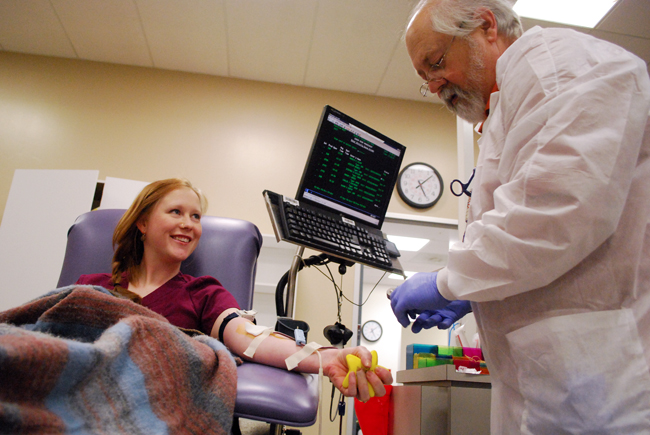 Austin resident Betty Heuer donates blood at the Blood and Tissue Center on North Lamar Boulevard on Thursday afternoon. Some people waited hours before they could donate because of the large response in response to the fertilizer plant explosion in West, TX.

In the hours following an explosion at a fertilizer plant in the town of West, Austinites poured into local blood banks, waiting in lines for up to two hours to donate blood to be sent to hospitals near West.

Nicole Vommaro, an employee at the Blood and Tissue Center of Central Texas, said there was an outpouring of support following Wednesday’s explosion.

“On a normal basis, we get everywhere from 40 to 50 blood donors coming through the door [at this donor center], and that’s including scheduled appointments and walk-ins,” Vommaro said. “Between this donor center and our donor center in Round Rock, which we opened up specifically for today, we’ve seen over 500 donors already.”

Though the Blood and Tissue Center’s first responsibility is to maintain a consistent blood supply for local hospitals, Vommaro said there had been enough community support to meet that need and still maintain a significant amount of donated blood for West. She estimated the center had sent over 350 units of blood north to Carter Bloodcare, the supplier for the hospitals surrounding West.

“Just between yesterday and today, and with the response we’ve had, we’ve already been able to entirely replenish our stock,” Vommaro said.

Vommaro emphasized her hope that donors maintain support in the weeks to come.

“Blood donors are needed all year long,” she said.

Megan Leinfelder, an advertising junior from Waco, waited for more than an hour and a half in order to donate blood. Leinfelder said she knew immediately after hearing the news that she would want to help.

“I wanted to go home and help, but my parents didn’t want me to drive home because it was so late,” Leinfelder said. “As soon as people mentioned that [the Blood and Tissue Center] would be donating blood to West, I decided to come by.”

Leinfelder said she felt a personal connection to the community, though her own relatives do not live there.

“If you live in Waco, it’s not uncommon at all to know people from West or have friends with family in West,” Leinfelder said. “Everyone knows someone with family there.”

Yvonne Dailey, an Austin resident, said she does not typically donate blood, but that the West explosion spurred her to try and get into the habit again.

“When I heard the news, I felt kind of helpless, so I wanted to do something,” Dailey said. “This is the one suggestion I heard for how to help.”

Dailey said she feels a connection to West, even though she does not know people in the area.

“I’ve driven through there a lot, back and forth over the years, and I’ve eaten a lot of kolaches,” Dailey said. “It just feels close to home.”