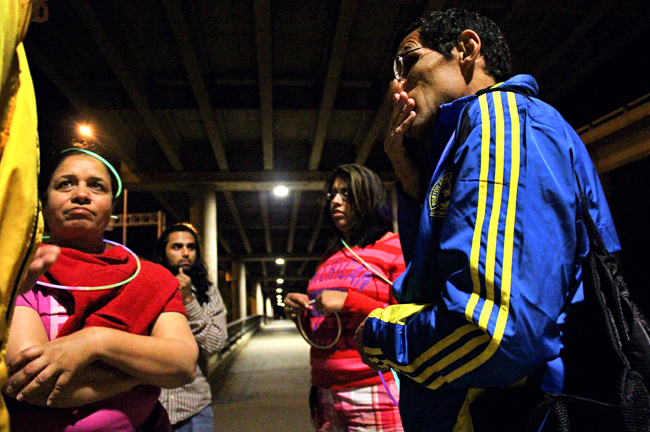 Runners Amardeep Kahlon and Ron Mora converse in a group on the trail at Lady Bird Lake on Thursday evening, where a vigil run was organized in support of the victims of the Boston Marathon bombings.

Austin runners came together in support of the victims of this week’s Boston bombings in a vigil Thursday night.

Gilbert’s Gazelles, an Austin-based running group that was in Boston this week, organized a run on the three-mile Ann and Roy Butler Trail around Lady Bird Lake.

Amy Stewman, a runner who ran in the Boston Marathon, said although she is still working through the trauma, she is thankful to be OK.

“I think for my husband and I, I think we’re still processing it,” Stewman said. “I think we’re extremely grateful for the gift of life and not wanting to take it for granted.”

Like Stewman, many participating in the vigil were runners at the Boston Marathon hoping to comfort their running mates and turn the page on their experiences.

“For us it was good, because we haven’t talked to each other since then and we’re running partners, so for us it was good to come together during this time and compare stories and talk and see how we’re doing,” Stewman said.

Students and faculty at UT also reacted to the Boston bombings.

Barry Brummett, professor and communication studies department chair, whose daughters were at the Boston Marathon but were uninjured in the explosion, said the Boston bombings represent another step in the United States’ fight against terror.

“The attacks will certainly make the marathon a symbol of our long, ongoing ’war on terror,’ like the Twin Towers were,” Brummett said. “As for long term effects, I think we have to wait and see who the
perpetrators are.”

UT students said they were shocked by the news.

“Like most people, [I was] shocked at first,” said Zachary Reeves, international relations and global studies senior, “and then [I felt] just general despair as the number of the injured kept piling up.”

“I was sad, it was shocking,” said statistics graduate student Hakan Goren. “After that I was thoughtful that it might be another terrorist attack, and all the Muslim people would be blamed for that, because I come
from Turkey.”