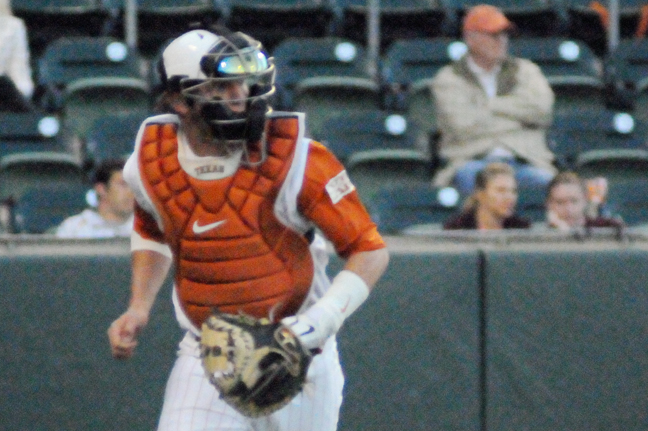 Although Texas earned an important 6-1 win over UT-Pan American on Tuesday night, the effects of its series loss to Kansas over the weekend still linger. Texas scored 12 runs in three games against the Jayhawks, but its nine errors were the most glaring concern to come out of the series.

Texas looked poised in last Friday’s series opener against Kansas after jumping out to a 4-2 lead early in the game, but a few errors and runs later, the Jayhawks were able to take command with a three-run fifth inning. The game went 12 innings before a winner was declared, but the Longhorns’ five errors and 10 strikeouts said all that needed to be said about the loss.

In Game Two, the Longhorns pulled out a 2-1 victory behind a complete-game gem from Dillon Peters, but still managed to leave seven runners on base while committing one error in the field.

Three more errors were committed by Texas in the rubber match of the series, with the Longhorns falling short, 4-3. In that series finale, Texas recorded 10 hits but left 12 runners on base while the defense allowed two unearned runs during Nathan Thornhill’s otherwise solid eight innings on the mound.

Despite scoring a solid 12 runs in the three-game series with the Jayhawks, the sweet part of the Longhorns lineup continued to leave runners on base. Erich Weiss went a combined 4-for-12 at the plate while Ty Marlow went 4-for-13 and single-handedly left eight runners on base.

The Longhorns’ everyday catcher, Jacob Felts, who has flown under the radar this season and is normally a defensive asset, recorded three of Texas’ eight errors from behind the plate in the series. For a team that feeds off consistent pitching and defense, such a lack of focus cannot happen against Big 12 competition.

Weiss, who is currently second on the team with a .323 batting average, continued his rough patch at the plate by going 0-for-5 with five runners left on base in Tuesday’s win against UTPA. The Longhorns’ third baseman is clearly one of the cornerstones of the lineup, but his 29 strikeouts lead a team that can’t afford to miss opportunities to score.

When it comes to records, West Virginia is in the same boat as the Longhorns this season. The Mountaineers score a lot of runs but their 3.90 team ERA should provide the Longhorns their best chance at claiming their first Big 12 series win this season.

This weekend’s series will bring one of three things for the Longhorns: errors and missed opportunities, or wins. West Virginia gives Texas its best chance so far to get the latter.