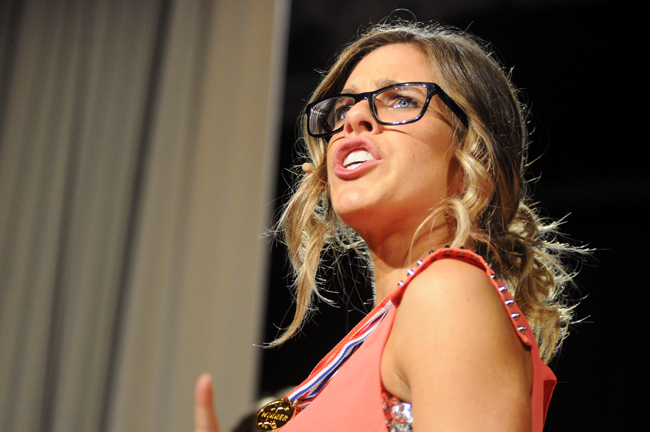 A post-apocalyptic United States is separated into squares, resembling a chessboard. Washington D.C., known as Square 48, is occupied by Agon High School, where students seek political change and compete for justice through the game of chess. At least this is the world in the Madrigal Theatre Committee’s show “Agon.”

This weekend, the Madrigal Theatre Committee will take the SAC Auditorium stage to showcase the new student-written musical “Agon.” The committee allows students who aren’t theatre and dance majors to participate in productions to showcase their talents.

Rebecca Walach, a directing sophomore and co-director of “Agon,” commented on her appreciation for the committee.

“We have this whole realm of people who aren’t theatre people, which is really cool,” Walach said. “It’s a really great thing to be with people who share the same passions.”

The playwright, Matt Hill, a theater and dance and radio-television-film junior, began conceptualizing the musical more than a year ago. He described the plot revolving around a disenfranchised student at Agon High School, who, with the help of his friends, challenges the status quo and runs for class president, resulting in a heated political campaign.

Though some things have changed from conceptualization to opening night, Hill said his initial vision for “Agon” has remained the same, including the title.

“‘Agon’ is one of the Greek terms for ‘play,’” Hill said. “Specifically, agon means competition, rather, the type of game in which people in a contest can win. Something like a board game such as chess is agon. In the play, agon is the battle between two people both competing for class president.”

Shannon Price, a journalism sophomore and music director for “Agon,” composed more than 20 pieces for the show. She said her original pieces alter everyday to meet the talents of the cast.

“It’s a really collaborative piece,” Price said. “I tell the musicians my vision for the songs and they have the talent to come up with exactly what I want.”

Calli Conti, a theatre and dance and marketing senior and actress in “Agon,” was impressed with the show from the very first table-read.

“It’s a huge musical, not some little project. The directors have put their blood, sweat and tears into this show. I’m so excited to be a part of this,” Conti said.

The directors, cast and crew are ready to showcase their hard work and tell the story they’ve been rehearsing for months.

“This is my life,” Hill said. “We all have high hopes for this show and want it to be the best. We hope to share this story with as many people as we can.”