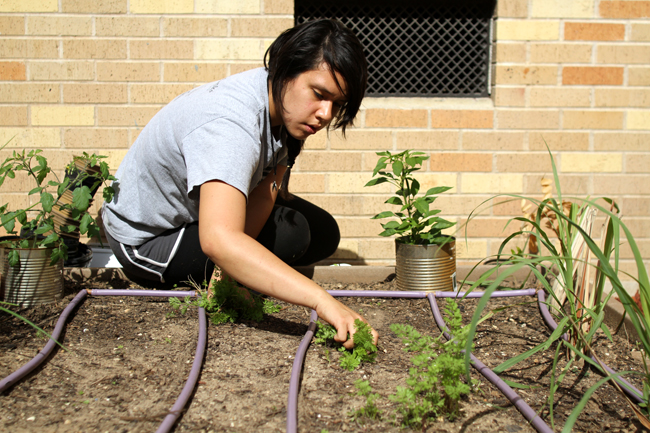 Students added mulch, new compost and a trellis for climbing plants to grow on to Kinsolving Dining Hall’s garden Sunday morning, in the first event of the Division of Housing and Food Service’s “Earth Week.”

The garden workday, a come-and-go event open to students, faculty and staff, was organized by DHFS environmental specialist Hunter Mangrum.

Mangrum said the garden is a part of DHFS’s goal to make students more aware of how and where their food is produced.

“We want our gardens to be a teaching platform,” Mangrum said. “You can see, this is where food comes from. It doesn’t come from a supermarket, but it actually grows and there’s a seeding process and there’s a whole system involved in producing food.”

Biochemistry freshman Sanghwa Park, who came out to learn about gardening, said she does not have gardening experience, but she likes the idea of helping to build a garden.

“If you’ve ever been to the Lady Bird Johnson [Wildflower] Center, the main message is conservation and you can build your own garden in a small area,” Park said.

Environmental science freshman Heather Rovner, who works part-time to maintain the garden, said she enjoys working on the garden because it is sustainable.

On Monday, DHFS will follow up its gardening event with an Earth Day Carnival on Gregory Plaza. The next day, it will host a film screening of Y.E.R.T.: Your Environmental Road Trip, a movie about a trip to all 50 states exploring sustainability.

“The things we’re doing this week are things that we really care about,” Mangrum said. “I’m really excited about the film screening, because I went to a conference in LA and met the people who filmed it and put [it] together. I think it’s just a really well-done documentary.”

On Wednesday, DHFS will tally the results of an inter-dorm competition to reduce power consumption. Mangrum said he will work to make the competition better-known next year.

DHFS’s earth week will end Thursday on its “Harvest Dinner” in J2 and Kinsolving, which serves locally-sourced, sustainable foods one day for dinner each year.

“It’s pretty in-depth to have all the pieces come in to play where people know about it,” Mangrum said. “We do a lot of work behind the scenes to do all the prep for the food.”

Mangrum said greens from local sources often are not as processed as what DHFS normally buys, requiring them to do more preparation of their own.

“[Let’s say you buy Swiss chard,] our chefs have to go through and take the spine out and get them into an edible state,” Mangrum said.

At the end of the day, DHFS food service unit manager Robert Mayberry said sustainability for DHFS normally comes from small things, including incremental power cuts and using herbs from its own gardens.

“There’s just a lot of little things that can make the campus more sustainable,” Mayberry said.