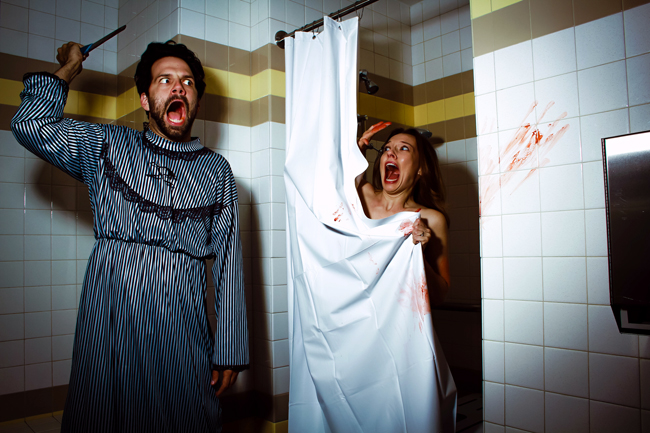 Renowned local actors Brian Villalobos and Akasha Banks Villalobos re-enact the infamous shower scene from Hitchcock’s 1960 film Psycho. The pair has been featured in numerous RTF and local productions, earning them a coveted and much-respected place in the Austin film industry.

As hard as they tried, Akasha and Brian Villalobos couldn’t get away from filmmaking — or each other.

The couple has been married for six years but are still on rocky ground with their favorite art form.

Both Akasha and Brian graduated from UT. Akasha studied radio-television-film with hopes of becoming an editor, and Brian studied journalism with the belief it would lead to a more successful career than acting. Even though both of them aspired to act, continuing to audition for plays, the fear of instability kept them from being theater majors.

Since graduating in the early 2000s, Brian and Akasha have worked a variety of odd jobs: waiting tables at Pluckers, ushering at an IMAX theater and writing for the San Antonio Current. Today, Brian and Akasha co-teach a film class at Gonzalo Garza Independence High School in partnership with Austin Film Festival. Their students write scripts and are involved in all aspects of production.

“It’s like parent-producing,” Brian said. “A lot of these kids, it’s their first time making a movie, so we are trying to strike a balance of shooting a movie in a day and trying to make it as good as possible. And to give them intense experience and to come away with a love of it and feel like they’ve done something they can be proud of.”

If either of them had wanted Hollywood-level superstardom enough, they would have moved to New York or Los Angeles. But the do-it-yourself atmosphere of Austin has inspired new ambitions in both Brian and Akasha.

“I have something very specific to say and I can’t sit around and wait for someone to say it for me,” Brian said. “I feel like that’s what pulls me to want to make movies.”

While Brian and Akasha avoided acting through teaching and writing jobs, they started missing it in early 2011. They started acting heavily in UT student films.

“The great thing about UT stuff is they finish it because it’s due. Other things just go nowhere,” Akasha said. “It’s less intimidating when you are starting because you’re learning, they’re learning. It’s perfect. My best stuff is still UT stuff.”

Akasha remembered being so busy in one semester that filmmakers would argue over what time they could have Brian or Akasha. They have since pulled back in their involvement at UT, but not for a lack of interest in the industry.

“We are doing all of this because we love movies, right? But we haven’t really been in the kind of movies we love,” Akasha said. “Until we’re writing them, we aren’t expressing much, just these little parts of other people’s expressions.”

They’ve worked as actors outside of the University as well. Ben Moody, the writer, director and co-founder of Blue Goggle Films, worked with Brian and Akasha in a web series “BIT Parts” and on short films.

“The two of them do have a short-hand between one another and can almost complete each other’s sentences,” Moody said. “Watching them work together is inspiring as they are both bursting at the seams with creative energy.”

They realized early on that Austin was not New York City or Los Angeles. Narrative film directors and producers come through to cast small speaking roles, but they are few and far between. Most of the work is in commercials. As Akasha said, the chance of being right for a role is slim to none.

The high school film class has given Brian and Akasha a taste of what it’s like to be on the other side of the camera.

“This is my first taste of producing something I didn’t write and direct, and it’s crazy,” Brian said. “It’s so much easier to show up on set and act and leave.”

But they know themselves well. As soon as either one of them becomes disenchanted with acting, an opportunity arises that they can’t turn down.

“[Filmmaking] is our true true love, but it’s surrounded by stuff that keeps trying to convince you that you’re not in love with it,” Brian said. “Like a relationship.”

Brian and Akasha laughed realizing the hot and cold relationship they have with filmmaking is much like their own relationship.

The pair met while acting in a play in 2001. Early on, their relationship was an awkward back and forth of friends who want to be more but can’t find the right moment.

They broke up a series of times, never following through because of a shared lease or simply missing each other too much. It was love that brought Brian and Akasha together and it has continued bringing them back to film.