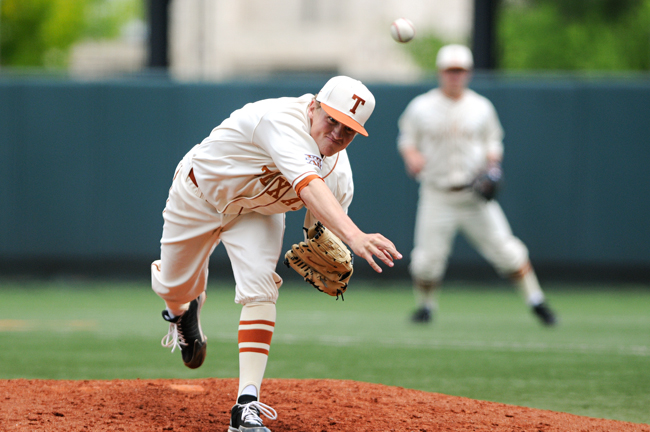 Junior pitcher Nathan Thornhill throws towards the mound in the Longhorns’ loss to West Virginia. Thornhill retired the first nine batters he faced and lasted six innings before getting pulled. He gave up five hits and three runs while striking out five.

The Longhorns dropped the rubber match to West Virginia, 6-3, in 10 innings, dropping their eighth consecutive Big 12 series on Sunday afternoon. The game was tied at 3 going into the 10th inning before junior Corey Knebel gave up three runs to put the Longhorns in a hole going to the bottom of the frame. Texas was able to get two on but couldn’t push a run across to even the score.

“This was probably even more disappointing than usual,” junior Mark Payton said after the game. “We have had our ups and of course our downs, but we have got to be more consistent at the plate. I mean, our pitchers pitched lights out all weekend.”

Knebel, who pitched his longest stint this season at 3 1/3 innings, took the loss to fall to 3-3 on the season. Junior Nathan Thornhill started on the mound for Texas and pitched six innings, surrendering three runs on five hits.

In the bottom of the frame, West Virginia walked junior Erich Weiss and gave up a single to freshman C.J Hinojosa to bring the tying run to the plate with no outs. Payton came in to clean up but popped out to shortstop on a full count. Freshman Jeremy Montalbano followed by flying out center field.

Marlow came up as the last chance for the Longhorns but hit a soft grounder straight to the first baseman to end the game.

“We really did have our chances to win the game. In the eighth I think we could have won it there,” Texas head coach Augie Garrido said. “I think we should have won in the ninth had we executed properly.”

On Friday night, sophomore Parker French pitched a solid game for the Longhorns, but a sacrifice fly off of Knebel in the eighth gave the Mountaineers the 1-0 series-opening victory. On offense, the Longhorns couldn’t get anything going and were blanked for the third time this season.

After dropping the first game of the three-game series, the Longhorns came back and dominated in Game 2 on Saturday afternoon. The Texas offense put up 12 runs off 14 hits against a struggling West Virginia pitching staff. Junior Jacob Felts and Marlow each contributed a career-high four RBIs in the win.

The Longhorns will face Houston on Tuesday before heading to Waco for a three-game series this weekend against Baylor.