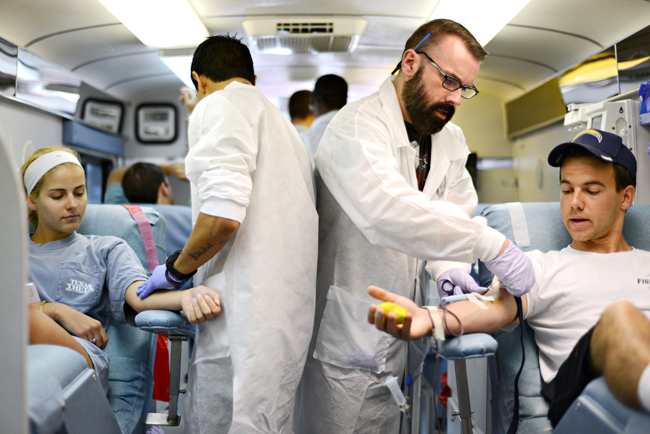 Finance sophmores Ashley Davison and Matt Johnson give blood during the Sigma Phi Epsilon blood drive for West families Monday afternoon. More than 30 people signed up to help bring relief to the victims of the fertilizer plant explosion on April 17. " />

Finance sophmores Ashley Davison and Matt Johnson give blood during the Sigma Phi Epsilon blood drive for West families Monday afternoon. More than 30 people signed up to help bring relief to the victims of the fertilizer plant explosion on April 17.

The explosion in West last Wednesday led officers of Sigma Phi Epsilon to organize a community blood drive Monday to help residents of the small town.

“There’s always one or two events we do every semester to give back to the community,” Schramm said. “There are also spontaneous events like this blood drive that I organized. We’re always trying to do our part to give back, so when the explosion hit West Texas last week, we decided a blood drive would fit perfectly.”

Schramm said he organized the event with The Blood Center of Central Texas and set it up in the fraternity parking lot from 11 a.m. to 4 p.m..

“I know a lot of blood drives aren’t available in this zip code but I found [the Blood Center of Central Texas],” Schramm said. “I got in contact with them and it was a really easy process. You don’t pay them anything, they just show up. You just give them an idea of how many people are coming and then they just work with you.”

Finance junior and fraternity president Doug Brustkern said listening to the news and hearing the need for donations is what caused his organization to consider hosting the blood drive.

“We just figured it would be a good thing to do because there are people in need,” Brustkern said. “And since we have a history of doing it, we wanted to bring it back to help out.”

Sigma Phi Epsilon advertised their blood drive through word of mouth, and emails were sent out on fraternity and sorority listservs. Schramm said the event was also publicized by the Interfraternity Council, which published event notices on its Facebook and Twitter accounts.

Undeclared natural sciences freshman Ellen Cocanougher said she donated blood at the drive to help out the victims of the explosion in West.

“It was a tragic thing,” Cocanougher said. “ So I just want to help out West and give as much blood as I can.”

Correction: This article was updated to show Matthew Hart, not Bobby Blanchard, wrote this report.