How bad are the Houston Astros? 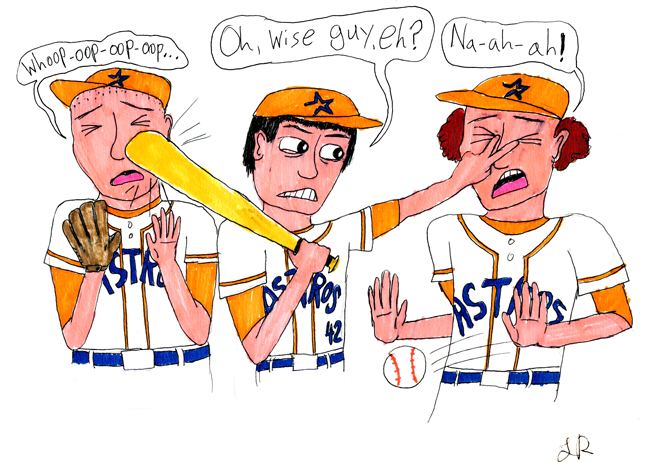 The Astros have been in the process of taking a massive salary dump in the past few years, and now they are left with a steaming pile of shell-shocked would-be minor leaguers. Not exactly the formula for winning a pennant. Especially in the rejuvenated American League West, where Oakland has shown it has the pieces to give the Angels and Rangers a run for the division crown. Right now the Astros are easily the worst team in the major leagues, and it’s not even close.

It doesn’t take much digging to figure out why this team is so terrible. The Astros’ opening day payroll for the entire roster was smaller than some individual players’ salaries in the league. There are five Astros who are signed to multi-million dollar deals for this season, and those five make a shade under $10 million combined. Houston has just five wins in 19 games, and there’s an argument to be made that it doesn’t even deserve that much. With the prices of stadium food now, a tray of hot dogs and a few soft drinks have just as much clout as the Astros.

New owner Jim Crane has also made a strategic move in selling the team’s broadcast rights to Comcast SportsNet Houston, which sounds like something out of a “Terminator” film. If the strategy was to put the team on a network only a handful of subscribers can watch, then bravo Crane, you have successfully shrouded your team from the public eye. It might ultimately be the best thing for fans. There are only so many leads you can see slip away in the eighth and ninth innings before you start to cheer for the Rangers instead.

But if you’re a true Astros fan, with fond memories of the Astrodome and those awesome jerseys from the ‘90s, you won’t give up that easy.

There’s hope yet for the organization, but it won’t likely involve any current player or staff member. It’s never too early to be thinking about next year. Or, in the Houston Astros’ case, the year after next. Or maybe even after the next summer Olympics. It hasn’t been this depressing to be an Astros fan since we all figured out that Enron was about as viable an enterprise as a Nigerian email scam. No, you don’t have an uncle that is urgently trying to wire you $15 million for the small fee of all your personal information. And no, the Astros are not going to win the American League West any time soon, either. But I did hear about a 13-year-old kid from the Dominican Republic that may be able to help the Astros out in a few years. Just kidding, even with the services of seven studs, the Astros are doomed for mediocrity in the near and distant future.

Jose Altuve excluded, the team struggles to work against opposing pitchers’ pitch counts and is collectively striking out at a record pace. As a team, the Astros average nearly 10 strikeouts per game. Most of those whiffs came from Brett Wallace in the first few games of the year, but he was quickly sent back to Triple-A to fix that. A lot of the team’s impatience at the plate has to do with its overall inexperience. The average age is 27 on the team’s active roster. The bottom line is that the bulk of this year’s roster needs more experience, whether it’s down on the farm or with the big boys, even if that means getting roughed up from time-to-time.

So keep your heads up, Astros faithful, and try not to get your feelings hurt when someone makes fun of your team. It’s going to happen often, and unless you want to be that guy that changes his baseball allegiance every other year, you’re going to have to grow some tougher skin. Maybe you can even try out for the team if you really want to be a part of the rebuilding process. Although I won’t be able to watch the team play every night because I am being held hostage by Time Warner Cable, I will keep a close eye on the team’s progress in the coming years.