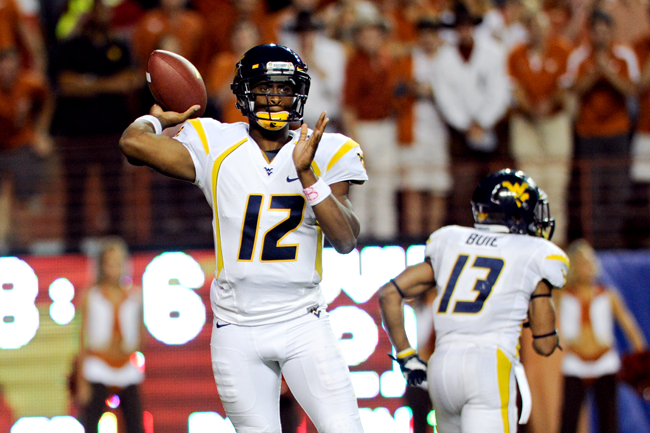 West Virginia quarterback Geno Smith, should he slip, would be an intriguing fit in Minnesota.

2. Jacksonville – Eric Fisher, OT, Central Michigan – The Jags haven't spent a first-round pick on an offensive lineman in five years. If you're going to give Chad Henne and Blaine Gabbert continued chances, might as well protect them while giving Maurice Jones-Drew some room to run.

3. Oakland – Sharrif Floyd, DT, Florida – An interior building block as a new regime tries to get off the ground in Oakland.

4. Philadelphia – Dion Jordan, OLB, Oregon – Reunite Jordan with college college Chip Kelly. If the Aldon Smith comparisons pan out, then this is a home run, even though the 6-foot-6 underproduced in college. Jordan fits perfectly in the NFC East. He can disrupt the quarterback (Eli Manning, Tony Romo) and he is quick enough to chase them down (Robert Griffin III).

5. Detroit – Lane Johnson, OT, Oklahoma – Probably a stretch, but with offensive tackles flying off the board, Detroit can't pass up a chance to fortify the line.

6. Cleveland – Chance Warmack, OG, Alabama – A rush-end like Ziggy Ansah would be nice, but the Browns just spent big bucks on Paul Kruger. Here's Warmack, perhaps the best overall player in the draft — and best guard in quite some time. He should feel right at home opening up running lanes for old college teammate, Trent Richardson.

7. Arizona – D.J. Fluker, OT, Alabama – Same situation as Detroit. Probably a stretch, but the Cardinals have to scoop up the last of the elite offensive tackles. Doesn't matter who's quarterback (and I think Geno Smith would be a reach here), the offensive line has to get incrementally better if Arizona is to compete in the NFC West.

8. Buffalo – Ezekiel Ansah, DE, BYU – The offseason signing of Mario Williams did little to help Buffalo get after the quarterback; the Bills finished with a middle-of-the-road 36 sacks. Add the freakish Ansah, who’d play outside lienbacker in the Bills’ 3-4 scheme, and you’ve got the makings of a dynamic front-seven. With two games per year against Tom Brady, Buffalo, which signed OLB Manny Lawson in the offseason, can afford to get greedy with pass-rushers.

9. New York Jets – Tavon Austin, WR, West Virginia – How do you satiate an angry fanbase? Draft a slick, explosive receiver — that’s how. With questions at quarterback, taking Austin ensures that whoever lines up under center will have something to work with.

10. Tennessee Titans – Dee Milliner, CB, Alabama – The best defensive back in the draft is slipping because of injury concerns, but Milliner is a nice fit for a team that prides itself in its ability to defend the pass.

11. San Diego Chargers – Star Lotulelei, DT, Utah – The Chargers used a second-round pick on a defensive tackle last season and a first-rounder there in 2011, so this isn't a "need" pick, but rather one based on value.

12. Miami Dolphins – Tyler Eifert, TE, Notre Dame – Offense is the priority here, and without reaching to take a tackle to replace Jake Long, the Dolphins get Ryan Tannehill the next-best thing: a versatile weapon in the passing game.

13. New York Jets – Barkevious Mingo, OLB, LSU – Just the guy the Jets wanted to get at No. 9. How Mingo's career pans out will be analyzed for years, as this is the pick New York got from Tamp Bay in the Revis deal.

14. Carolina – Sheldon Richardson, DT, Missouri – Richardson is a mountain of a defensive tackle, with potential to get a lot better.

15. New Orleans – Kenny Vaccaro, S, Texas – The second-worst passing defense would benefit from the addition of the draft's best safety. Vaccaro would come in and make an impact right away. His ability to cover outside and slot receivers, as well as step up and make plays in the running game, are highly valued.

16. St. Louis – Alec Ogletree, ILB, Georgia – Ogeltree is the opposite of Dion Jordan: poor measurables, but great college results. Also, his character concerns aren't likely to sway Rams coach Jeff Fisher, who has a history of brushing those issues aside.

17. Pittsburgh – Desmond Trufant, CB, Washington – The once-rugged AFC North is opening up, what with Joe Flacco and Andy Dalton emerging as super-productive quarterbacks. The Steelers' LCB, Keenan Lewis, started 16 games last season but did not record an interception.

18. Dallas – Jonathan Cooper, OG, North Carolina – The Cowboys already locked up their left tackle for the next 10 years with the Tyron Smith selection two years ago. Time to get him a long-term pal on the interior. Don't be surprised if Jerry Jones trades up — even if it's to get Cooper, who some have going in the first 10 selections.

19. New York Giants – Xavier Rhodes, CB, Florida State – This has been a cursed position for the Giants in recent years. Aaron Ross is back on the team after failing to meet big expectations in his first go-round. Terrell Thomas can't stay healthy, while results have been mixed for Prince Amukamara in two seasons.

20. Chicago – Manti Te’o, LB, Notre Dame – The perfect replacement for Brian Urlacher in the middle of the Bears' defense. A slow 40-time isn't a biggie.

21. Cincinnati – Eddie Lacy, RB, Alabama – Somebody's going to take a running back, and why not the Bengals? BenJarvus Green-Ellis finished with over 1,000 yards last year in his Bengals debut, but he only picked up around 68 per game. Lacy provides an upgrade. It's a two-back league, anyway.

22. St. Louis – Cordarrelle Patterson, WR, Tennessee – Again, Fisher isn't afraid to pull the trigger on a player with character red-flags. Patterson isn't Tavon Austin, who's likely the No. 1 option in St. Louis, but he's still very dynamic (16.9 yards per reception, 12.3 yards per carry in one year at Tennessee).

23. Minnesota – Geno Smith, QB, West Virginia – Yes, the Vikings spent a first-rounder two years ago on Christian Ponder, but Smith here is too good to pass up. Why waste the prime of Adrian Peterson’s and Greg Jennings’s careers with Ponder, who has completed only 59 percent of his passes last season in his career?

24. Indianapolis – Jarvis Jones, OLB, Georgia – An edge-rusher to replace Dwight Freeney, and a major steal at No. 24. Jones drops because of chronic spinal stenosis, which didn't seem to bother him too much at Georgia (12.5 sacks last season).

25. Minnesota – Sylvester Williams, DT, North Carolina – Minnesota took a luxury pick at No. 23, but now it's time to upgrade at a position of immediate need.

26. Green Bay – Margus Hunt, DE, SMU – A physical specimen at 6-foot-8, Hunt could be the second coming of Jason Taylor. With his size and speed (4.6 40-yard dash), Hunt can fill a variety of holes for Green Bay — a five-technique in the 3-4 defense, or a stand-up pass-rusher opposite Clay Matthews.

27. Houston – Justin Hunter, WR, Tennessee – Like everybody else, I think the Texans have to take a wideout with the No. 27 pick. With Austin and Patterson off the board, the 6-foot-4 Hunter is the next-best candidate. He's got a 39-inch vertical and ran a 4.4 40-yard dash at the combine. He's not just some workout wonder, though. Hunter had 1,083 yards receiving and nine touchdowns last season.

29. New England – Bjoern Werner, DE, Florida State – Werner had an ACC-best 13 sacks last season, while New England was 15th in the NFL with 37. An outside receiver could work here, but this fits a need for the Patriots.

30. Atlanta – Kyle Long, OL, Oregon – Quickly-rising up the draft boards, Long would be a nice right tackle for the Falcons, who signed left tackle Sam Baker to a six-year deal this offseason. Atlanta really doesn't have many weaknesses.

32. Baltimore – Kevin Minter, ILB, LSU – Ray Lewis and Dannell Ellerbe have both moved on. It's time for the Ravens to find a new heart of the defense. Minter was an All-SEC player in 2012.