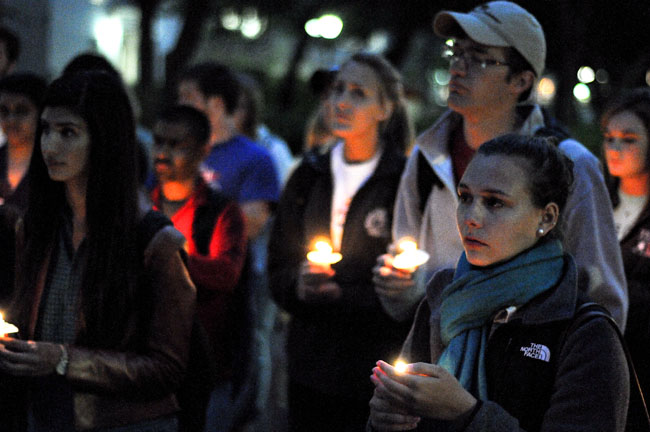 Students attend a candlelight vigil held to  honor the people affected by the recent tragedies in Boston and West. The event, hosted by Student Government, Senate and the Graduate Student Assembly, included a moment of silence for the victims of the bombing and explosion.  " />

Students attend a candlelight vigil held to  honor the people affected by the recent tragedies in Boston and West. The event, hosted by Student Government, Senate and the Graduate Student Assembly, included a moment of silence for the victims of the bombing and explosion.

Following a bombing in Boston and an explosion in West last week, UT students held a vigil on West Mall Wednesday in honor of the victims.

“Whenever crisis and devastating events happen, it is important to stand up and show support,” Student Government president Horacio Villarreal said. “This shows the victims that we support and care for them.”

Student Government and the Senate of College Councils sponsored the vigil, in which students held candles in remembrance.

On April 15, a pair of bombs went off during the 117th annual Boston Marathon. The bombing killed three people — including an 8-year-old boy — and injured more than 200 people. About 27,000 runners entered the competition this year. Two brothers, Dzhokhar and Tamerlan Tsarnaev, have been identified as suspects behind the bombing. Dzhokhar is being held in custody, while Tamerlan was killed in a standoff with the police later during the week of the bombing.

Two nights after the Boston bombing, an unrelated explosion occurred at a fertilizer plant in West, a small town about 20 miles north of Waco. The explosion killed 14 people, injured more than 200 people and demolished several neighboring buildings.

Villarreal said both events hit close to home, as many students know members of the West community, and the terrorist attacks and corresponding shooting occurred near college campuses with many students close in age to UT students.

“Coming together to remember is a healthy way to respond to tragedy,” vice president for student affairs Gage Paine said. “This is a time for everyone to take a moment to stop and think.”

Paine said that while people were impacted by the tragedy, they plan to continue doing what they love.

“People who run find that their community was hurt, but runners won’t let that stop them,” Paine said.

Undeclared freshman Shaina Flowers, who is from Burleson — about an hour north of West — said she was not directly affected by the events in either city but is aware of friends and family of friends whose lives have been changed forever.

“It makes me scared that something like that could happen so close, so it’s important to show this kind of support,” Flowers said. “It reminds people how unity and coming together are vital to emotionally healing and being there for others.”