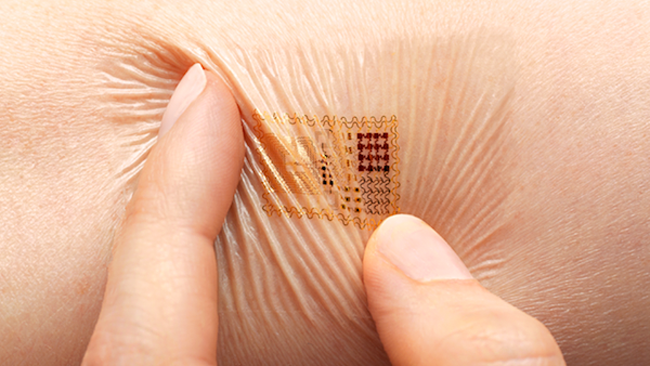 MC10 announced that in 2014 it will release a clear, adhesive microchip, the biostamp, that can collect a variety of data points about a person’s body in real-time. Photo courtesy of MC10.

Microsoft to announce next Xbox in May

At last, the next generation of Xbox consoles will be revealed to the gaming community. In a private event set for May 21, Microsoft will release the name and details of its next gaming device. Although the Redmond-based company has succeeded in keeping many of these details shrouded in mystery, there have been rumors about an Xbox that will always have to be connected to the Internet. In recent weeks, Microsoft executive Adam Orth voluntarily stepped down from his position in the company after responding to criticism about the possibility of an “always on” console.

Which laptops run the Windows operating system best? Lenovo? Dell? Acer? According to Soluto, a software development company that rates and compares computers, the answer is actually Apple. The 2012 Macbook ranks No. 1 on a list of competitive laptop computers. The criteria for this list of models and brands are based on “frustration analytics.” These can include everything from boot time to application crashes per week, while measuring raw computing ability as well.

Under the Marketplace Fairness Act that is now being discussed in Congress, sales tax for online purchases may be included in a consumer’s total expenditure. Amazon and the Republican Party, which are both in support of this legislation, have claimed that this new law will help raise government revenue and require states to do a better job of taxing their customers. Residents who live in a state without sales tax but purchase an items from a state with sales tax will now be required to pay. The Marketplace Fairness Act will not apply to every purchase that is made on the Internet. Instead, only retailers that sell $1 million in goods will be forced to comply. Concern that this will increase the size of the government has already been discussed by a number of critics, including Grover Norquist and The Wall Street Journal.

In order to help combat theft and other property crimes, the Palm Bay Police Department in central Florida will roll out a new device, “Cop Dots.” Using a DNA-like adhesive, these pens will help owners claim their property if it is stolen. The adhesive dots, which are invisible to the human eye, carry a laser-engraved ID marker that can be scanned by law enforcement officials in order to help return a recovered item to its rightful owner. Once valuable including like jewelry and electronics are registered, residents can be notified if property turns up.

Checking body temperature, heart rate and hydration will soon become as easy as applying a Band-Aid. Company MC10 announced that in 2014 it will release a clear, adhesive microchip that can collect a variety of data points about a person’s body in real time. That information can then be stored and sent to mobile devices and computers to help monitor vital signs remotely. On top of its impressive size, the chip will use non-invasive techniques that make it useful in a variety of situations. Whether it’s measuring muscle impact during a workout or monitoring an infant’s breathing at night, the Biostamp will bring people even closer to technology.