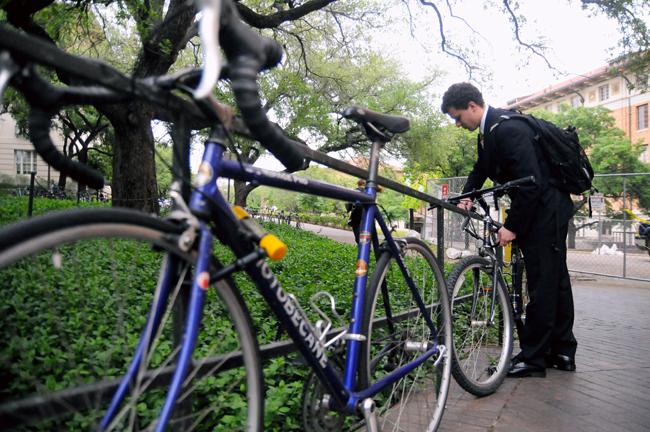 Cyclists may soon receive more consideration from city officials regarding the convenience of parking downtown as Austin continues to strive to be a more pedestrian- and bicycle-friendly city.

An ordinance proposed by the city’s Planning Commission and Public Works Department amends Austin’s Land Development Code to redefine and clarify bicycle parking. The ordinance would clarify various parts of the code, including taking bike parking into consideration when modifying parking for motor vehicles for existing sites. It would also clarify requirements for bicycle parking locations from “as convenient as that of motor vehicle parking” to 50 feet or less from the entrance of a site, according to the ordinance.

During its meeting Thursday, the Austin City Council set a May 9 public hearing to hear further discussion from the community on the amendment.

Annick Beaudet, manager of the city’s Bicycle Program in the Public Works Department, said the amendment simply improves on current bicycle parking requirements rather than creating new ones.

Currently, there are reduction incentives scattered around the Land Development Code, but Beaudet said consolidating them will allow developers to more easily implement less parking and further incentivize alternative transportation.

“This is so that any developer can go to one place where you have a one-stop shop for ways that you can reduce the parking required to do a new development that also encourage multi-modal transportation,” Beaudet said. “That’s really the heart of the amendment.”

Beaudet said the amendment has gone through smoothly so far, due in part to the thorough work of the Planning Commission Codes and Ordinances Subcommittee.

“The Planning Commission Codes and Ordinances Subcommittee has proven to be very effective in working through proposed code amendments so when they actually go to Planning Commission and City Council, they have been vetted through a community lens pretty thoroughly,” Beaudet said. “Because of that, I think we’ve worked through any sorts of issues and I feel like the ordinance is very well written.”

Pharmacy graduate student Angela Stermer said she does not have many issues parking her bike downtown aside from special events. If the amendments increase convenience of bicycle parking, Stermer said there will be a clear incentive for more people to ride bikes instead of drive.

“I think it will be an incentive to people who already bike or maybe are thinking about biking already,” Stermer said. “I don’t think it’s necessarily going to change the people who don’t consider biking, but if you’ve already started to consider it and it becomes convenient to park then it may influence you to ride your bike.”