Changes could be on the horizon for UT fundraising foundations 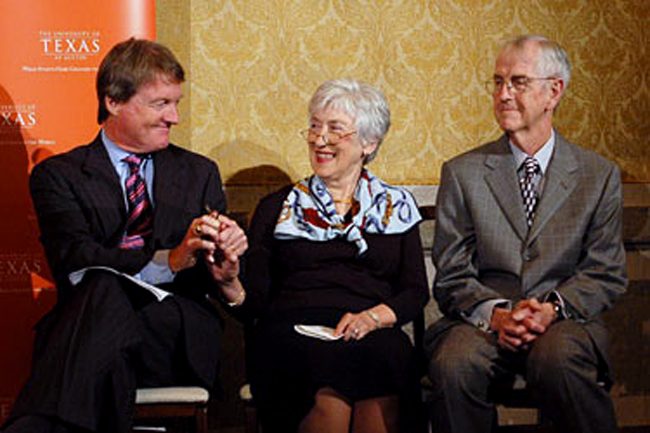 UT President William Powers Jr. sits with Sarah and Ernest Butler in a 2008 photo after the couple's bequest of $55 million — the largest contribution to a public university's music school. The College of Fine Arts' School of Music was named in their honor (Photo courtesy of Christina Murrey).

Read the University External Foundations Profiles to learn more about the history and financial figures of each foundation.

Recent public battles over lack of oversight in the University of Texas Law Foundation threaten to bring substantial changes to a complex mechanism of private fundraising developed over several decades that has successfully raised billions of dollars alongside internal fundraising efforts.

As early as next month, an advisory task force led by UT System Regents will present guidelines for a uniform structure and record-keeping procedures for all external foundations to avoid situations where UT employees receive direct benefits from external sources without administrative oversight. University fundraising is divided among internal development operations and a handful of external foundations set up as non-profits with independent governing boards.

External foundations raise their own funds and contribute to the University but have limited involvement or oversight by UT administrators.

In an email to The Daily Texan, Regent Alex Cranberg said the task force’s review and report will help prevent oversight problems similar to those encountered with the School of Law Foundation.

The regents commissioned the task force following a report by Barry Burgdorf, System vice chancellor and general counsel, on the relationship between the School of Law and the School of Law Foundation — one of the external foundations affiliated with the University. In 2011, Lawrence Sager, then dean of the University of Texas Law school, was asked to resign by President William Powers Jr. after receiving a forgivable $500,000 loan from the UT Law Foundation without administrative oversight. Fallout from the foundation’s loan program resulted in Burgdorf’s report, but in a contentious vote that drew criticism from state lawmakers, the regents decided to pay for another external investigation specific to the Law School Foundation. Burgdorf resigned amid the contentions, and declined requests for comment.

The regents agreed to let the Texas attorney general’s office handle the investigation after pressure from lawmakers, and Cranberg said that scrutiny is distracting from the purpose of the committee’s review.

“The context in which individual foundation oversight efforts have been made is in fact being overlooked,” Cranberg said. “This context is the demonstrated potential abuse of private foundations that are affiliated with public institutions not just at UT, and not just in Texas.”

Cranberg said the lack of clarity on the relationship between external foundations and the University can leave donors misinformed.

“Another issue is that many donors do not realize that they are giving money not to the University of Texas, or to a publicly accountable charity, but rather to a private foundation which is not subject to the same oversight or guidelines,” Cranberg said. “Sometimes donors prefer the greater flexibility that private foundations have, but this preference should be fully informed by disclosure of the options and trade-offs associated with giving to a private versus a public entity.”

Cranberg has a history of identifying flaws between foundations and the institutions they serve. He was involved in identifying “abusive practices” within an external foundation that serves three institutions during his time on the board of Metro State College in Denver regarding the sale of two building below market value.

Cranberg also said the work of private foundations and their contributions is important and of “unquestionable integrity.”

“It would be a shame if there was any sort of pressure to try to terminate the foundation or try to control it, because the one advantage of the foundation has been that it’s not an arm of the state,” Ratliff said. “It has always been to the University’s advantage for well-intentioned people to be able to act independently.”

In the event of a court case, some foundations, although they are separate nonprofits, can be deemed branches of a university if they share office space, employees, public funds or state legal services, Washington attorney Thomas Arden Roha said. The laws that govern foundations vary from state to state, Roha said.

He said arguments over the independence and possible mishandling of foundations tied to state universities are not common, but are not unheard of. Roha wrote a paper in 2000 at the request of the Governing Boards of Universities and Colleges that listed general guidelines for foundations.

“It doesn’t get a lot of press from state universities, the press, or donors because most foundations are well run,” Roha said. “But where problems arise there can be litigation. Court cases can be filed.”

Burgdorf’s report, which was set aside by the Board of Regents, recommended the UT Law Foundation separate itself from the University by moving to its own location and not sharing staff.

But taking those steps wouldn’t necessarily mean the UT Law Foundation is safe from legal repercussions.

“As a general rule, I would say the law is not clear cut. You have to examine each relationship between the state, University and its foundation independently,” Roha said.

The formation of foundations at UT grew from a need to supplement declining state support. State funding currently makes up 13 percent of the University’s operating budget compared to 47 percent of the budget in 1983.

“We used to say that philanthropy was the icing on the cake, but I think now that it’s really more of the gas that drives the engine at a world class institution,” said Julie Hooper, associate vice president for development — the University’s internal fundraising unit.

Each year the University’s colleges and departments receive $343 million in payouts from more than $3.1 billion that has been endowed to the University, Hooper said. She said these endowments help fund scholarships and academic chairs that increase the University’s ability to recruit top faculty and students.

Within the Office of Development a team is assigned to monitoring endowment creation, administration and compliance of both internal and external endowments.

Martha King, executive director of development, said her office oversees 5,237 endowments, including approximately 250 held by the Law Foundation. The McCombs School of Business Foundation and Lyndon Baines Johnson Foundation also have endowments that are monitored by the office, King said.

She said external foundations write their own agreements with donors.

The endowments also allow UT to develop academic programs that rank among the best in the nation, Hooper said.

The Jackson School of Geosciences has the largest endowment of any school at UT, with $432 million and ranked ninth among other earth science schools in the 2010 U.S. News and World Report Rankings.

Some schools at UT are ranked highly despite their smaller endowments. The School of Social Work is ranked seventh nationally, although its $13 million endowment is the third smallest at UT.

The process of networking with the University’s 460,000 living alumni and other potential non-alumni donors requires an army of volunteers in addition to development staff, Hooper said. Each college has its own team of volunteers, most taking the form of advisory councils. These councils, which vary in size from a couple of dozen board members to more than 100, have different roles in the development of UT.

At the Cockrell School of Engineering, the Engineering Foundation Advisory Board consists of volunteer members responsible for securing most of the school’s endowment and for plans to build a new school, according to assistant dean Jeff Halton.

With this 60 year old fundraising model, Halton estimates the Engineering Foundation Advisory Board has raised 75 percent of the  engineering school’s total endowment.

There has been a shift in advisory boards formerly known as foundations to disassociate themselves with that moniker. Halton said the need to distinguish the internal fundraising units from external foundations caused the change.

The college is late to dropping the “foundation” name according to  Kathleen Aaronson, development director for the  College of Liberal Arts.

“We haven’t been called a foundation in several years,” Aaronson said. “Most schools haven’t.”

The internal fundraising unit for the Jackson School of Geosciences has kept the name The Geology Foundation.

The foundation precedes the Jackson School of Geosciences. The internal foundation, made up by administrators, alumni and geology experts, was created in 1953 to support the former Department of Geology founded in 1888.

The volunteer councils meet biannually, but work with development throughout the year, in most cases to help raise funds, said Michael Oldham, chairman of the School of Nursing Advisory Board.

“You contact the people that you know and know of and encourage them to give,” Oldham said. “Each school has really ramped up and improved the ranks of the development officers. Development officers can call us and say, ‘we’re going to have lunch with an alum, would you come with us?’”

Although the most generous contributors often receive recognition in the naming of campus facilities, small donations make up the bulk of giving, Hooper said.

“We’ve had 48 gifts from individuals more than $5 million, and we’ve had 950,000 gifts in the range of $1,000 or less,” Hooper said. “That’s how these campaigns work. There’s a small number of very, very large gifts and there’s a large number of small gifts. We need both.”

Communication foundation inactive after years of not turning profit