“Mud” is an exceptional coming-of-age story 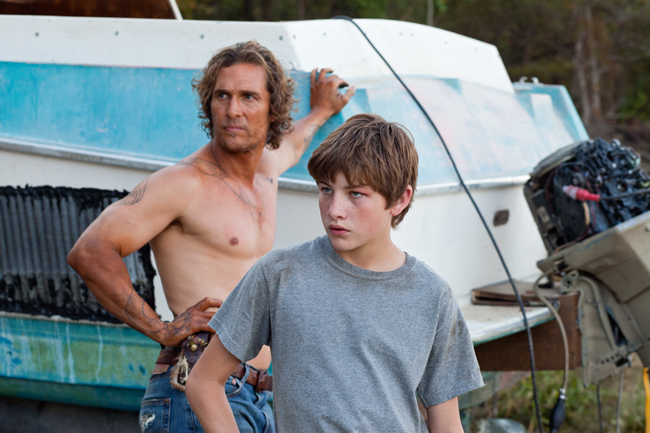 To a degree, cinema has become standardized to a set of audience expectations, with many movies defined as superficial variations on something you’ve seen before, which means that films with the nerve to color outside the lines are often celebrated simply for being different. “Mud,” on the other hand, excels for its conventionality. It sticks to the realm of classical storytelling, but executes a deliberately paced story in such a fantastic fashion that the familiar becomes riveting once again.

“Mud” depicts the coming of age of Ellis (Tye Sheridan) and Neckbone (Jacob Lofland), two young boys with a taste for adventure. They have their own private oasis, an island in the Mississippi River, and it is there that they stumble upon Mud (Matthew McConaughey), a snaggletoothed fugitive. As bounty hunters mercilessly pursue Mud, Ellis also has to contend with his parents’ marital troubles, Mud’s determination to reunite with his beloved Juniper (Reese Witherspoon) and Ellis’ own first love.

Even though McConaughey gets the titular role in “Mud,” the film truly belongs to its two young stars, Sheridan and Lofland. Child actors can often be obnoxious or obtuse, but director Jeff Nichols casts his youthful heroes perfectly. Ellis is an unhesitating man of action, and Sheridan makes his confidence, conviction and eventual heartbreak compelling and wholly believable with a performance full of powerful emotion and reluctantly fleeting innocence. Lofland’s Neckbone is a more minor character, but Lofland is incredibly natural and funny as Ellis’ best friend and sounding board.

Though “Mud” focuses on its teenage performers, the film hinges on McConaughey. McConaughey has been on a remarkable streak in the last few years, and “Mud” continues the actor’s reinvention with another outstanding, layered performance. Nichols has created a vibrant, engaging figure here, and McConaughey nails the way Mud’s speech veers from extravagantly hyperbolic to quietly earnest and hopeful. There’s a sense of tangible danger to Mud, but McConaughey plays him with that trademark magnetic charm so well that Ellis and Neckbone can’t resist helping this charismatic stranger reunite with his lost love.

Witherspoon plays Juniper as a steaming pile of white trash, but there’s an uncanny regret and soulfulness to her performance that makes you understand Mud’s unceasing affection for her. Meanwhile, the perpetually underrated Ray McKinnon plays Ellis’ father with a tragic, misguided passion, and Joe Don Baker strikes a heaping helping of terror into the audience’s heart as the leader of the bounty hunters chasing Mud. The MVP among the supporting cast, however, is easily the quiet, effortlessly intimidating Sam Shepard, who gives the film one of its most slyly earned beats in a rousing finale.

In his first two films, Nichols cultivated a feeling of dread with an extraordinary sense of time and place. “Mud” replaces the creeping sense of things to come with a genuine longing for something better, while never losing sight of Nichols’ singular eye for writing realistic small towns that easily fill you with nostalgia for a place you’ve never been and characters so well drawn and carefully constructed that you feel you’ve known them for years by the time the credits roll.

There are few surprises to be found within the film, but Nichols’ script is so delicately, deliberately structured, unfolding at its own naturalistic pace, that the storytelling is skillful and powerful. His direction is even more impressive, especially in his lush, stunning shots of the open Mississippi River and his staging of a climactic gunfight.

Few coming-of-age stories tread into uncharted waters, but “Mud” somehow manages to find something new to express about the beautiful simplicity of youth through its classical, elegant structure and execution. The film is Nichols’ best work to date, exploring new corners of evocative Southern backdrops, brimming with wonderful performances and emerging as one of the best films of the year so far.