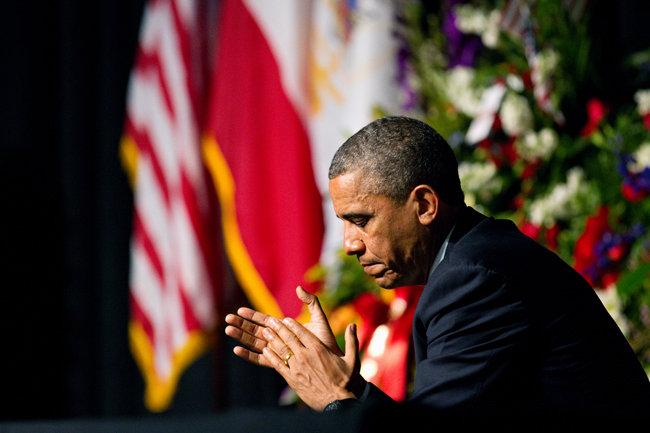 WACO — President Barack Obama told mourners remembering the 12 first responders killed in the explosion in West last week that the country stands with them as they attempt to restore their town.

“You are not alone. You are not forgotten,” Obama said at Baylor University, about twenty minutes south of the town of West, on Thursday. “We may not all live here in Texas, but we’re neighbors, too. We’re Americans, too. We’ll be there after the cameras leave and after the attention turns elsewhere. Your country will remain ever ready to help you recover and rebuild and reclaim your community.”

The explosion at the West Fertilizer Co. plant killed 15 people — including 12 first responders — injured more than 200 and destroyed 140 homes and several buildings, including a nursing home and two schools.

Twelve flag-draped caskets lay before the stage during the service in Baylor’s basketball arena, each with an accompanying portrait. Before the service, a screen above the stage played a photo montage of the responders set to music, including John Williams’ score to the 1978 movie, “Superman.”

Obama, who joined state and federal officials onstage at the memorial, said the responders — who were volunteers — showed courage and dedication to protecting their neighbors and community.

“The call went out to farmers and car salesmen and welders, funeral home directors, the city secretary and the mayor,” Obama said. “It went out to folks who were tough enough and selfless enough to put in a full day’s work and then be ready for more.”

Video eulogies played during the ceremony with family members and friends telling stories about their loved ones.

Gov. Rick Perry said he could offer no words to ease the pain the community has suffered but said the spirit that drove the first responders lives on.

“First responders know better than anyone there’s no such as a thing as a routine emergency,” Perry said. “The firefighters and medical technicians who died last week in West certainly knew that, but it didn’t slow them down as they raced toward that burning factory.”

U.S. Sen. John Cornyn, R-Texas, said the responders left a legacy of selflessness and that courage allowed them to face “overwhelming danger on behalf of their community.”

“When the call went out for help, these men — along with countless others in West — ran immediately toward the danger, not away from it,” Cornyn said. “They ran toward it looking for a way they might help. And though they were taken from us in a blast that shook the earth and shattered buildings, nothing will ever shake the memory of their heroism and their bravery.”

First responders from across the state, county and continent gathered in Waco to grieve for the fallen responders whom many emergency personnel said they considered family. Some came from as close as Round Rock and as far away as Calgary, Canada.

Four came from Shreveport, a city in northwest Louisiana. Gloria Wilson, Shreveport Fire Department captain and paramedic, said the department lost a member three years ago during a response to a fire.

Wilson said the grieving process has several steps before acceptance, but everyone grieves in their own way and death is part of the job of being a firefighter.

“As the Bible says, this too shall pass,” Wilson said.

“They are truly heroes, and I think everyone here would do the same thing,” Mulligan said.