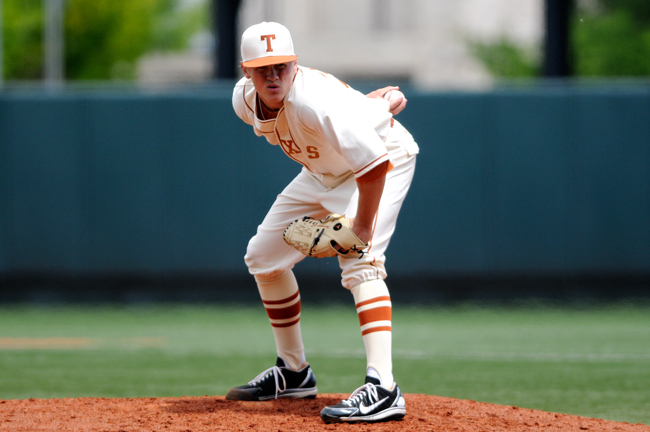 Nathan Thornhill has the highest ERA of Longhorn starting ptichers at 2.54 and Texas sits at the bottom of the Big 12 standings.

They started from the top, now they’re here.

After losing three straight games in last weekend’s series to Baylor, the Longhorns find themselves in last place in the Big 12 with essentially no chance of reaching the NCAA Tournament this season. It will be the second straight year Texas has missed the tournament — but why?

Texas’ numbers over the entire season seem to suggest that it is doing less with more. The Texas pitching staff holds a Big 12-best 2.49 ERA, but the Longhorns are just 5-13 in conference play.

In this past weekend’s series against Baylor, Texas showcased more than ever why it will miss out on going to Omaha, something the program used to be accustomed to doing every season. Texas committed five errors and left 23 runners on base against Baylor, which now holds the No. 2 spot in the conference after its sweep of the Longhorns.

For a team averaging so many hits and allowing so few runs per game, the Longhorns have shown that they will fold in close games. Texas holds a 9-9 record in one-run games and a 2-5 record in two-run games this season.

With records of 11-2 when scoring in the first inning, and 19-1 when leading after six innings, Texas seems to be a team that can only win if it scores first and maintains. But with a third of the starting lineup batting over .300 this season, the results should be better.

Heading into Tuesday’s tilt with Prairie View A&M (20-20, 9-9) a team that holds a similar record to the Longhorns this season, Texas needs to start asserting itself at the plate and preserve some dignity.

Although the Panthers haven’t faced the level of competition the Longhorns are used to, they are batting a combined .262 as a team.

The one-game matchup should answer an important question for Texas moving forward: Do they choke against better competition? Prairie View A&M pitchers hold a combined 5.33 ERA this season, while the Longhorns average 3.83 runs per game.

If Texas finds itself in a close ballgame with a mid-major Panthers team, Augie Garrido will have a lot of reevaluating to do heading into the final games of the season.