Looking ahead at Texas’ 2014 draft prospects 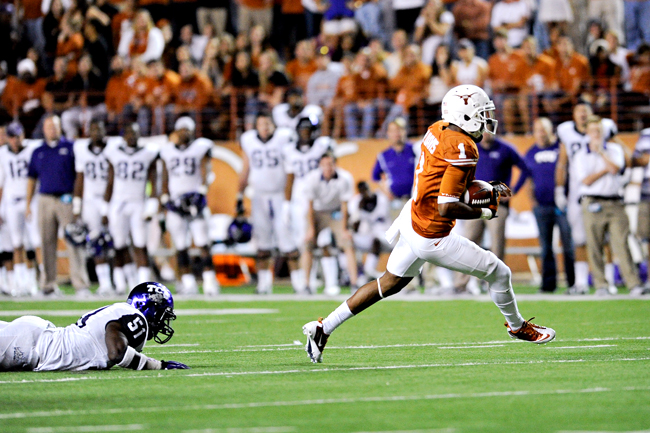 Senior wide receiver Mike Davis (1) enjoyed a productive junior year, and if he continues to refine his skills in his last season at Texas he could be the next Longhorn to make it to the NFL. Davis is joined by other upperclassmen as well as a few others as potential NFL prospects

Former Texas players Kenny Vaccaro, Marquise Goodwin, Alex Okafor and Brandon Moore fulfilled their childhood dreams last week, earning spots on four different NFL rosters. As Texas heads into the fall season, the spotlight will shine on seniors eager to prove themselves in the eyes of NFL scouts and coaches.

Wide receiver Mike Davis is among those entering his final year as a Longhorn. After seeing significant playing time in his freshman and sophomore years, Davis started 11 times in 2012, leading the team in receiving yards, receiving touchdowns and yards per catch. Davis was a second team All-Big 12 choice by the San Antonio Express-News and the Dallas Morning News.

Entering the draft was a possibility this year for Davis, as he bounced back and forth on whether to remain at Texas or leave for the NFL. After discussing his options with Texas coaches and his family, Davis decided to stay.

“It’s been tough for me,” Davis told ESPN’s Joe Schad. “I did plan on coming out [for the draft], but I need to do this one more time. I want to try to win the Biletnikoff award. Those guys at Texas deserve another year.”

Returning for his final year means Davis will have a chance to increase his efficiency on the field and boost his tapes with more catches.

“I took it upon myself to be a senior leader and help the other receivers get better,” Davis said.

2013 will mark offensive guard Mason Walters’ fifth and final season at Texas. After missing the bulk of his freshman season with a foot injury, Walters returned to start 12 games during his second season and win UT’s Frank Medina Rehabilitation Award.

Walters has started all 13 games during his past two seasons. He was a 2012 honorable mention All-Big 12 selection and named to the Outland Trophy and Lombardi Award watch lists.

Walters is already 17th on CBSSports.com’s list of top offensive guards heading into the 2014 NFL Draft.

Jackson Jeffcoat earned buzz from sports analysts and columnists heading into the 2012 season as a top draft prospect.

The heavily recruited Plano West defensive end played in eight games during his first year at Texas and started 12 as a sophomore, missing only one start due to injury.  His promising junior year was cut short by a right pectoral muscle rupture during the Texas-Oklahoma game.  Despite the injury, Jeffcoat still managed to come in second on the team in tackles for loss
and sacks.

Athleticism is in Jeffcoat’s blood: his father, Jim Jeffcoat, was a well-known NFL lineman who played for both the Dallas Cowboys and Buffalo Bills.

Jackson, lauded for his speed and flexibility on the field, still has analysts abuzz with his potential to land a spot in the early rounds of the 2014 draft. Now, Jeffcoat will have 2013 to prove himself after his recovery.