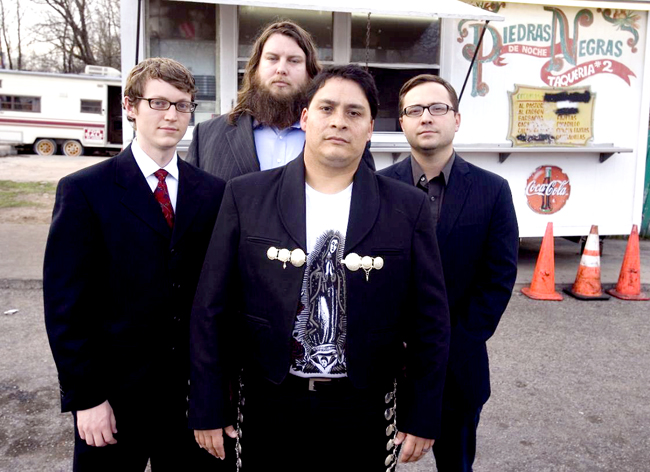 It is difficult to find a person without an appreciation for the art form that is the taco. But for four Austin men, their love for tacos transcends the average devotion and borders on insanity. By day, the quad lives in pleasant American normalcy, but by night, they transform into crusaders searching for the best taco Austin can offer.

Jarod Neece and his partners, Gordon “The Commish” Murphy, Justin “Cornbiter Deluxe” Bankston, and Mando “El Mundo de Mando” Rayo spend much of their lives eating and writing about nothing but tacos. They started their popular Austin-based blog, “Taco Journalism,” in 2006.

“Tacos are the perfect, traditional food,” Neece said, “You have to be invested in eating a big, fat burrito. You can do so much more and have much more fun with a taco.”

“Taco Journalism” is a blog dedicated to spreading the word about the best tacos in the Austin area. They were inspired by the progress of Yelp and their mutual love for breakfast tacos. The sheer number of tacos in Austin keeps their blog updated constantly with new taco destinations.

“We’re not here to bring down taco establishments in Austin,” Neece said, “We want to love every taco we try, and make everyone love tacos.”

“Taco Journalism” grades each restaurant, trailer, truck and hole-in-the-wall with a one to five star ranking. Both ends of the star spectrum are hard to come by on the website. They post a short description and explanation with the star ranking and offer up advice for ordering.

Neece noted that his favorite taco in Austin is at Al Pastor Taco Stand on Riverside Drive. It is situated in a trailer in the parking lot of a bingo parlor. Neece emphasized that upscale décor and a hefty price tag do not necessarily make a good taco.

“The most important thing is to see the effort and the love that went into each taco,” Neece said, “Dry, store-bought tortillas, bland salsa and tough, chewy meat proves they don’t care about what they are serving me.”

The four bloggers agreed that homemade tortillas, full-bodied salsas and carefully prepared meat from quality cuts of the animal are crucial elements of a proper taco.

“The tortilla is the most important part of a good taco,” Mando said, “It has to be fresh, hand-made and just like ‘abuelita’ used to make.”

“Taco Journalism” also offers tips for die-hard taco eaters. Most taco joints, according to Neece, have secret, special sauces that they don’t normally serve with their everyday taco. He suggests asking a server for their special salsa or sauce on the side.

“A good sauce can totally turn up the dynamic of the taco you’re eating. It can change it entirely,” Neece said, “I always ask for a side of green sauce to change up my tacos.”

The bloggers call Austin the “taco capital of the world.” They believe the combination of generational family establishments and a dynamic, hip culture creates an extremely versatile taco scene. In many ways they believe the Austin taco is as diverse as the city from which it was made. They urged the importance of not judging a book by its cover.

“I took Taco Journalism’s advice to go to Joe’s Bakery for the best breakfast taco in town,” special education freshman Katherine Aitken said. “It was spot on. They really know how to find the extraordinary in what seems average.”

The bloggers are currently writing a book called “Austin Breakfast Tacos: The Story of the Most Important Taco of the Day.” It will debut at the Austin Hot Sauce Festival in the first week of August. The book explores the history of the Austin breakfast taco, recipes from Austin culinary icons and taco oddities around the city.

“Everyone seems to have a story,” Neece said, “We’re just trying to spread the taco love however we can.”

El Patio serves tacos with a long history in Austin