Actress-writer Brit Marling talks about traveling, writing for herself, and “The East” 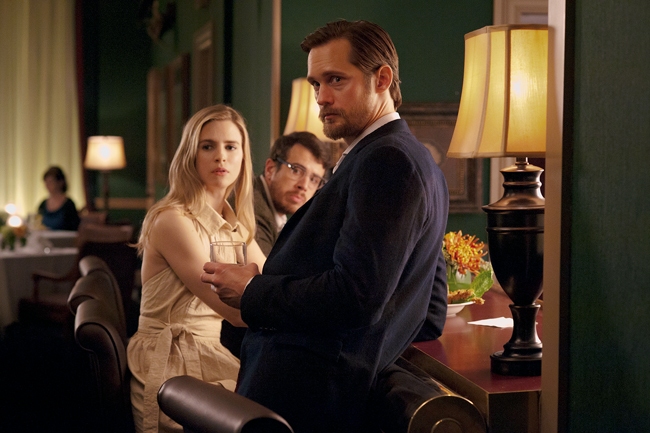 Sarah (Brit Marling) and Benji (Alexander Skarsgard) in “The East,” a movie about eco-terrorism. Photo courtesy of Fox Searchlight Pictures.

Writer-actress Brit Marling first came to South By Southwest two years ago with low-key sci-fi films “Another Earth” and “Sound of My Voice.” “The East,” her newest collaboration with “Sound of My Voice” director Zal Batmanglij, was the Closing Night film at this year’s festival. Marling stars as Sarah, a private security contractor asked to infiltrate eco-terrorist group The East.
The Daily Texan sat down with Marling at SXSW to talk about her new film.

The Daily Texan: What inspired this project?
Brit Marling: Four summers ago, before I had started acting and before Zal had started directing, we were just young people trying to make sense of our lives and figure out what we wanted to do. We spent a summer traveling and fell in with different anarchist communities and different collectives and lived on organic farms and learned to train hop and spent time dumpster-diving. We were different people at the end of it, more able to find a kind of freedom in living, and we wanted to try and tell a story about that. We wanted to tell a story about all the intense political and moral ideas behind it, how complicated it all is. But we wanted to put in a really fun, entertaining espionage thriller where that stuff is happening in the background.

DT: What were some of the distinct experiences you brought from your summer into this film?
Marling: The spin-the-bottle moment in the movie actually happened. It was really beautiful. It wasn’t spin the bottle the way you’d play in middle school, with everyone trying to figure out how to make out for the first time. It was spin the bottle as a way of connecting with people, and giving voice to what you did or didn’t want, and being physical and affectionate with friends and lovers.

DT: What are some of the challenges of writing the character of Sarah for yourself?
Marling: Sarah was interesting to me because she’s so unlike me. She’s conservative, and has a really strong sense of her opinion and morality about things, and is not easily swayed by other ideas. She’s a bit of an action hero. She has a toughness to her. I think we have a hard time writing about women. Even women have a hard time writing about women because there aren’t very many stories that show us different paths for them. They’re usually the girlfriend or the wife or the sister or the sex object, and when they are strong and acting with a lot of agency, it’s usually because the script was written for a man, and then the gender was changed at the last second.

DT: When Sarah is preparing to infiltrate The East, or when The East is carrying out one of its “jams,” the members put on nice suits or bleach their hair to slip into the role. Do you ever find yourself doing something similar as an actor?
Marling: That’s such a great observation! We’re obsessed with presentation and the surface of things. Everybody’s Facebook is literally just about them pitching themselves as they see themselves, and trying on different versions of themselves, and selling it or sharing it. I think the same is true in this story. The members of The East have realized that you shave the beard, you cut the hair, you pop in some pearl earrings, you put on a Rolex and a suit and suddenly you can infiltrate a totally different space from how you feel. They’re very interested in the idea of disguise and playing with the fact that people are so obsessed with the surface of things that they’re willing to overlook the fact that they’re letting a group of eco-terrorists into their home because they present well. It’s true that that’s also very much the part of an actor’s life. You have to get really comfortable with dissolving your identity and refashioning as a character and doing it a couple of times a year with different people and still holding on to who you are in between those things. It’s not an easy process.

DT: The terrorists in the film have an eye-for-an-eye philosophy. To what length do you think people should be held accountable for their actions?
Marling: That’s a good question, and that’s why we made a movie about it. It’s funny how the film, we feel this way, we don’t know the answers. All we can do is present the questions. It doesn’t matter which side of the political spectrum you’re on, people are frustrated and angry right now. The question becomes, what do you do? You look at past protest movements. The nonviolence of the freedom riders who got on buses and went from D.C. into the Deep South. That’s really brave. Is that the right way? Or … as some movements have done, [do] they go to structures and say, “What’s happening here is wrong. We have a right to set it on fire”? Is nonviolence correct, or is violence because violence is being used against you correct? We don’t know the answers. We’re not saying, “Corporations are bad and eco-terrorists are good.” We’re saying, “There are bad and good ideas and bad and good people on both sides.” That makes it massively confusing as to what we should do next, but we can’t do anything right until we start talking about it.