The Daily Texan • May 3, 2013 • https://thedailytexan.com/2013/05/03/third-iron-man-film-overstuffs-excellent-script-with-excessive-villains/ 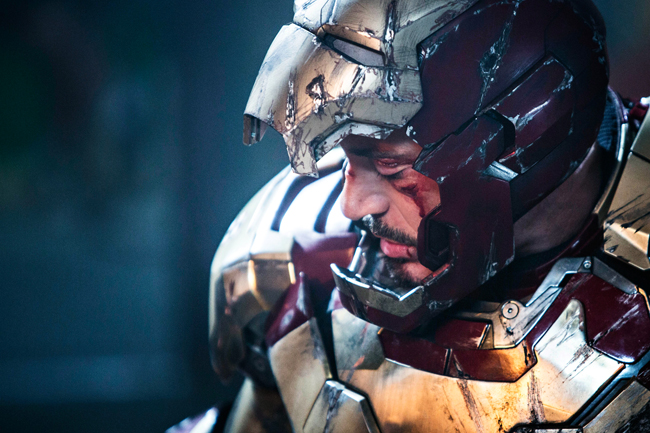 The law of diminishing returns is the bane of Hollywood executives’ existence and often pushes them to stuff sequels to the point of bursting simply because audiences expect the spectacle to get more expansive and grandiose with every film in a franchise. Finding a way to follow up the massively successful “The Avengers” is no easy task for Marvel, and “Iron Man 3” responds by telling a scaled-down, intimate story about a Tony Stark in peril, while still pushing the scope of the franchise to grander heights.

After his close call with death in “The Avengers,” Tony Stark is a broken man for the first time, wracked with anxiety. His girlfriend and assistant Pepper (Gwyneth Paltrow) is being courted by mysterious scientist Aldrich Killian (Guy Pearce). Even worse, the Mandarin (Ben Kingsley), a ruthless terrorist with an agenda, is wreaking havoc on the nation.

Robert Downey Jr. defines Iron Man, and he’s so comfortable in Tony Stark’s skin at this point that he could effortlessly coast through “Iron Man 3.” In the first two films, Tony Stark was a brash freight train of charisma, barreling through every problem in his path with an offhand barb, a smile, and occasionally his collection of Iron Man suits. But here, Downey Jr. plays Stark with unusual anxiety and fear. “Iron Man 3” gives Downey Jr. heftier dramatic material than he’s been asked to shoulder thus far, and he turns in a series-best performance, bringing Stark’s arc home with grace, humor and the same unflappable confidence that made him so great for the role in the first place.

Shane Black directed Downey Jr. on the criminally underrated “Kiss Kiss Bang Bang,” and it’s a delight to see him working on the massive scope that Marvel can afford. Black is one of the sharpest writers in Hollywood, and “Iron Man 3” has an excellent script that is endlessly witty and clever. By exploring how the presentation of a hero, or villain, can be just as important as his actions, Black incorporates the “Iron Man” iconography in new and surprising ways. Black also stages some grand moments of spectacle, particularly the thrilling destruction of Stark’s mansion.

Unfortunately, Black’s directorial voice occasionally chafes against the guiding hand of the Marvel franchise hive mind, especially in his handling of the film’s multiple villains. Aldrich Killian is a scientist who’s been developing a limb regeneration program, and his Extremis project is an ill-defined utility belt for bad guys, giving villains invincibility, super strength and even the ability to breathe fire. While Marvel’s films have delved into some pretty outlandish concepts, from demigods to alternate dimensions, Black never figures out if he should handle this as science fiction or supernatural fantasy, which results in a sloppily-executed threat for Tony Stark to battle.

Even if the villains don’t necessarily work in concept, one of “Iron Man 3”’s most pleasant surprises is Kingsley’s performance as the terroristic Mandarin. Kingsley is all bluster and threats in his terroristic dispatches, but when he and Stark come face-to-face, Black’s wry sense of humor comes into play in an unexpected but hugely entertaining fashion. James Badge Dale plays one of Killian’s cronies, and he brings a menacing intensity to some of the film’s most harrowing sequences.

Despite moments of charisma and competence, Pearce is a much less effective antagonist. As his character becomes more brazenly evil, Pearce gets increasingly hammy, and by the time “Iron Man 3” arrives at its rousing fireworks show of a finale, he’s swinging for the fences with his delivery of every line, missing more often than he connects. While “Iron Man 3” handles its multitude of villains better than most films, this may be an instance where Black gets a little too clever for his own good, and it’s hard not to wish he had given Kingsley more to do.

Although “Iron Man 3” isn’t Marvel’s best effort, it’s a strong outing and another exciting, hilarious collaboration between Downey Jr. and Black. While the film suffers from the same overstuffed syndrome as many other comic-book sequels, it’s the rare comic book film that’s able to explore new territory for its hero in a roundly compelling, well-acted fashion, making for an impressive start to the summer movie season.